The 1980s saw the end of the Cold War, and a transition by the MICC to a backup plan to keep social control firmly in the hands of the few - the "war on terror". This had been prepared in Jerusalem in 1979, and saw a gradual increase in false flag terror events in Western Europe, most notably in Italy, which would lead to the eventual exposure of Operation Gladio.

Operation Gladio was set up around the end of WW2, with the aim of resisting a potential invasion from the Soviet Union. Organised outside the national government, this was originally at least an MI6/CIA operation. By the late 1960s, concerns were so great that the Italian voters might vote in a communist leader, that the decision was taken to active the gladiators to prevent a communist government by whatever means were deemed necessary. The Gladiatori committed various murders and acts of false flag "terrorism", including in August 1980, killing 85 people with a bomb in Bologna Central Station. 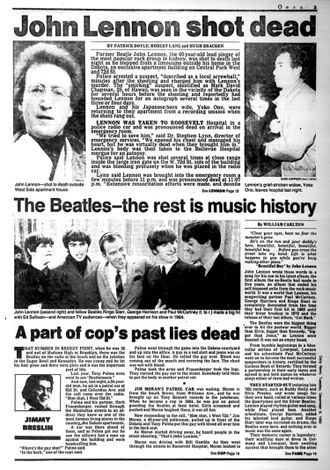 John Lennon was a famous and popular musician and peace activist whose campaigns against war in the 1970s had attracted a lot of interest from the US government.[1] He was assassinated on 8 December 1980, a killing blamed on Mark David Chapman. Chapman, who had been hanging around the Dakota for hours, behaving erratically[citation needed] was quickly "described as a local screwball".[2] The assassination was witnessed by José Sanjenís Perdomo, a member of the US deep state involved in setting up the CIA's Operation 40, a hit squad thta played a role in the JFK assassination. The Commercially-controlled media did not mention the name of Perdomo until 1987.[3]