The Rev. Andrew Ashdown is an Anglican priest who, since being ordained in 1991, has served in parishes in Yorkshire, Surrey and Hampshire, and also worked for a time as the Regional Desk Officer for South Asia, for the Anglican Mission Agency United Society for the Propagation of the Gospel (USPG).

He has travelled widely throughout Asia, Africa, the Middle East and Europe, and for a while, held responsibility for Diocesan links with West Africa.[1]

Andrew Ashdown was brought up in Zimbabwe of missionary parents during the Rhodesian war. After completing his education in England, he spent a while working in banking in the City of London, before going to spend 2 years as a volunteer Teacher at a Christian school in a remote part of Central India. On returning to England he studied Theology at King’s College London before training for ordination.

In the past 20 years, Rev. Ashdown had a particular passion for the Middle East and its people, regularly leading groups to the region, and visiting privately. Some of those experiences are illustrated in his book published in 2007 by Christians Aware: "The Stones Cry Out: Reflections from Israel and Palestine."

Since 2014, he has undertaken 5 visits to Syria: travelling around the country; meeting with faith and community leaders, and meeting with members of every section of society.

In 2016, Ashdown spoke to 21st Century Wire about having led a group of Peers and Faith leaders on a visit to the country and becoming the first British group to visit Aleppo since the beginning of the conflict.[2]

"At least 1300 civilians were killed in US airstrikes on Raqqa in the space of two months. It is estimated that between 3,000 and 6,000 civilians died in the US coalition bombing of Mosul. The civilian death toll in both these cases was regarded as acceptable 'collateral damage' by Western powers in order to rid and liberate the cities of IS and other extremist groups. Media barely reported these atrocities, and there was no outcry.

"Meanwhile, the media has been silent on the slaughter of hundreds of innocents in the centre of Damascus in recent weeks by the jihadists in East Ghouta, whilst accepting the claims of the Al-Qaeda linked terrorist groups in Easy Ghouta without any possibility of verification. The hypocrisy of Western governments, aid agencies, and media in their silence about the facts on the ground, their refusal to listen to the cries of most ordinary Syrians inside Syria, and their collusion with extremism is beyond shocking.

"That hypocrisy is prolonging the conflict, adding to the suffering of innocents on all sides of the conflict, and further destabilising the region."[3] 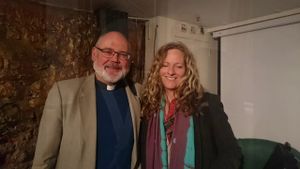