Deutsche Bank is a German bank "long been rumored to be the bank of choice for white collar criminals and cartels involved in money laundering and shady deals."[1]

In 1999, Deutsche Bank confirmed officially that it had been involved in Auschwitz during WW2.[2]

"Germany’s troubled Deutsche Bank faces fines, legal action and the possible prosecution of “senior management” because of its role in a $20bn Russian money-laundering scheme, a confidential internal report seen by the Guardian says."[3]

In the case, an anonymous source, i.e. a Western intelligence service, provided what presumably is a front organization called the Organized Crime And Corruption Reporting Project[4] with two sets of banking records, detailing money movements in and out of Russia. The fines threatened are from US and UK authorities, and the whole affair bears all the hallmarks of the offensive to reduce European/German business transactions with Russia[citation needed], as the Integrity Initiative also was interested in. 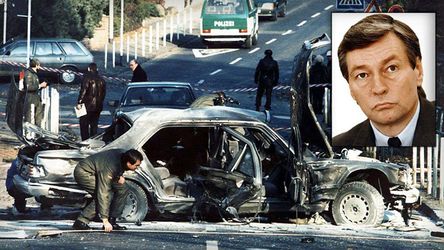 In 1989 the chair of Deutsche Bank, Alfred Herrhausen, was assassinated by a sophisticated bomb.

In November 2019, Thomas Bowers, a Deutsche Bank employee who personally signed off on hundreds of millions of dollars of loans to Jeffrey Epstein, reportedly hung himself.[1][6]

On 19 July 2020, both the husband and son of Esther Salas, a US judge who in 2020 was assigned to the case Karimi v. Deutsche Bank, were shot by a "lone nut". The case was about Deutsche Bank's handling of customers such as Jeffrey Epstein.

The Deutsche Bank Chair is usually a member of the Bilderberg steering committee. 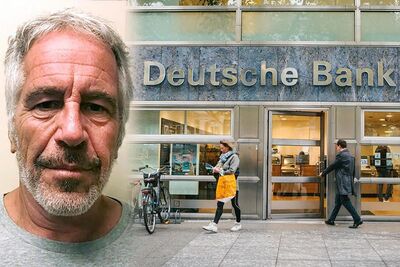 In 2020 the bank was fined $150,000,000 after the bank admitted "failing to properly monitor account activity conducted on behalf of the registered sex offender despite ample information that was publicly available concerning the circumstances surrounding Mr. Epstein's earlier criminal misconduct."[7]