Difference between revisions of "Document:Is Fukushima's nuclear nightmare over? Don’t count on it" 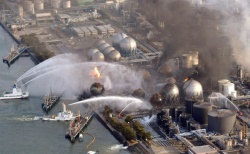 
Wikispooks Comment Chris Busby is arguably THE leading UK expert in the scientific field where - in the BBC News piece discussed here - such expertise is spuriously assigned to Geraldine Thomas. Busby has been relentlessly attacked by the nuclear industry for his work on the effects of persistent low-level radiation exposure and is thus familiar with the underhand tactics employed by it and its state-sponsored minions. However, it is still somewhat niaive of him to state "....the Great Britain of my childhood, a country I was proud of where you could trust the BBC", when. as far back as 1926 it's founder Lord Reith is on record, during the General Strike, as saying apropos the British Cabinet: "...they know they can trust us not to be really impartial". In matter of Deep State policy, the BBC is not and never has been impartial.

On the 5th Anniversary of the catastrophe, Prof Geraldine Thomas, the nuclear industry’s new public relations star, walked through the abandoned town of Ohkuma inside the Fukushima exclusion zone with BBC reporter Rupert Wingfield-Hayes.

Thomas was described as “one of Britain’s leading experts on the health effects of radiation”. She is " of the opinion that there is no danger and the Japanese refugees can come back and live there in the “zone”. Her main concern seemed to be how untidy it all was: “Left to rack and ruin,” she complained, sadly.

At one point, Rupert pulled out his Geiger counter and read the dose: 3 microSieverts per hour. "How much radiation would it give in a year to people who came back here,” he asked. Thomas replied: “About an extra milliSievert a year, which is not much considering you get 2mSv a year from natural background”.

“The long term impact on your health would be absolutely nothing.”

I must personally ask if Gerry Thomas is a reliable expert; her CV shows she has published almost nothing in the way of original research, so we must ask how it is the BBC has taken her seriously.

This recalled the day the first reactor exploded in 2011. I was in London, and the BBC asked me to come into the studio and comment. Also present was a nuclear industry apologist, Dr Ian Fells. Like Geraldine Thomas he seemed unconcerned about the radiation: the main problem for him was that the lifts would not work. People would have to climb stairs, he complained.

I said then on that first day that this was a serious accident like Chernobyl, but he and everybody who followed him told the viewers that it was no problem, nothing like Chernobyl.

Some months later, looking back, it became clear I was correct on every point, but I never was invited back to the BBC. I visited Japan, took sophisticated measuring equipment, obtained vehicle air filters, spoke to the Japanese people and advised them to take Calcium tablets to block the Strontium-90.

My vehicle air filter measurements showed clearly that large areas of north east Japan were seriously contaminated - including Tokyo. This was too much for the nuclear industry: I was attacked in the Guardian newspaper by pro-nuclear George Monbiot in an attempt to destroy my credibility. One other attacker was Geraldine Thomas. What she said then was as madly incorrect then as what she is saying now. But the Guardian would not let me respond.

The important evidence for me in the recent BBC clip is the measurement of dose given by Rupert’s Geiger counter: 3microSieverts per hour (3mSv/h). Normal background in Japan (I know, I measured it there) is about 0.1mSv/h. So in terms of external radiation, Ruperts’s measurement gave 30 times normal background.

Is this a problem for human health? You bet it is. The question no-one asked is what is causing the excess dose? The answer is easy: radioactive contamination, principally of Caesium-137. On the basis of well-known physics relationships we can say that 3mSv/h at 1m above ground represents a surface contamination of about 900,000Bq per square metre of Cs-137. That is, 900,000 disintegrations per second in one square metre of surface: and note that they were standing on a tarmac road which appeared to be clean. And this is 5 years after the explosions. The material is everywhere, and it is in the form of dust particles which can be inhaled; invisible sparkling fairy-dust that kills hang in the air above such measurements.The particles are not just of Caesium-137. They contain other long lived radioactivity, Strontium-90, Plutonium 239, Uranium-235, Uranium 238, Radium-226, Polonium-210, Lead-210, Tritium, isotopes of Rhodium, Ruthenium, Iodine, Cerium, Cobalt 60. The list is long.

The UN definition of ‘radioactively contaminated land’ is 37,000Bq/square meter, and so, on the basis of the measurement made by the BBC reporter, the town of Ohkuma in the Fukushima zone (and we assume everywhere else in the zone) is still, five years after the incident, more than 20 times the level where the UN would, and the Soviets did, step in and control the population.

But the Japanese government wants to send the people back there. It is bribing them with money and housing assistance. It is saying, like Gerry Thomas, there is no danger. And the BBC is giving this misdirection a credible platform. The argument is based on the current radiation risk model of the International Commission on Radiological Protection the ICRP.

Last month, my German colleagues and I published a scientific paper [1] in the peer reviewed journal Environmental Health and Toxicology. It uses real-world data from those exposed to the same substances that were released by Fukushima to show that the ICRP model is wrong by 1,000 times or more. This is a game-changing piece of research. But were we asked to appear on the BBC, or anywhere else? No. What do our findings and calculations suggest will have happened in the five years since the explosions and into the future? Let’s take a look at what has happened since 2011.

The reactors are still uncontrolled five years after the explosions and continue to release their radioactive contents to the environment despite all attempts to prevent this. Concerning the melted fuel, there is no way to assess the condition or specific whereabouts of the fuel though it is clearly out of the box and in the ground.

Meanwhile, robots fail at the extremely high radiation levels found; ground water flowing through the plant is becoming contaminated and is being pumped into storage tanks for treatment; high radiation levels and debris have delayed the removal of spent fuel from numbers 1, 2 and 3 reactor buildings. TEPCO plans to remove debris from reactor 3 and this work has begun. Then they are hoping to remove the fuel rods out of reactors 1 and 2 by 2020 and the work on removing debris from these 2 reactors has not begun yet.

Much of the radioactivity goes into the sea, where it travels several hundreds of km. up and down the coast, destroying sea life and contaminating intertidal sediment. The radionuclides bind to fine sediment and concentrate in river estuaries and tidal areas like Tokyo Bay. Here the particles are re-suspended and brought ashore to be inhaled by those living within 1km of the coast.

From work done by my group for the Irish government on the contaminated Irish Sea we know that this exposure will increase the rate of cancer in the coastal inhabitants by about 30 percent.

The releases have not been stopped despite huge amounts of work, thought and action. The treated water is still highly radioactive and cannot yet be released.

That is a real problem on site with three heavy spent fuel pools still full and largely inaccessible. Collapse of the buildings would lead to coolant loss and a fire or even an explosion releasing huge amounts of radioactivity. So this is one nightmare scenario: Son of Fukushima. A solid wall at the port side may have slowed the water down but diverting the water may cause problems with the ground water pressure on site and thus also threaten subsidence. Space for storing the radioactive water is running out and it seems likely that this will have to be eventually spilled into the Pacific.

Only 10 percent of the plant has been cleaned up although there are 8,000 workers on site at any one time, mostly dealing with the contaminated water. Run-off from storms brings more contamination down the rivers from the mountains.

There are millions of 1-ton container bags full of radioactive debris and other waste which has been collected in decontamination efforts outside the plant and many of these bags are only likely to last a handful of years before degrading and spilling their contents. Typhoons will spread this highly contaminated contents far and wide.

Let’s look at the only real health data which has emerged to see if it gives any support to my original estimate of 400,000 extra cancers in the 200km radius. Prof Tsuda has recently published a paper in the peer review literature identifying 116 thyroid cancers detected over 3 years by ultrasound scanning of 380,000 0-18 year olds.

The background rate is about 0.3 per 100,000 per year, so in three years we can expect 3.42 thyroid cancers. But 116 were found, an excess of about 112 cases. Geraldine says that these were all found because they looked: but Tsuda’s paper reports that an ultrasound study in Nagasaki (no exposures) found zero cases, and also an early ultrasound study also found zero cases. So she is wrong. The thyroid doses were reported to be about 10mSv. On the basis of the ICRP model, that gives an error of about 2000 times.

From the results of our new genetic paper we can safely predict a 100 percent increase in congenital malformations in the population up to 200km radius.

In an advanced technological country like Japan these will be picked up early by ultrasound and aborted, so we will not actually see them, even if there were data we could trust. What we will see is a fall in the birth rate and an increase in the death rate because we know what has been happening and what will happen; we have seen it before in Chernobyl. And just like Chernobyl, the (Western) authorities are influenced by or take their lead from the nuclear industry: the ICRP and the International Atomic Energy Agency, (IAEA) which since 1959 has taken over from the World Health Organization as the responsible authority for radiation and health (Yes!).

They keep the lid on the truth using ill-informed individuals like Geraldine Thomas and, by analogy with New Labour: New BBC. Increasingly I could say “New Britain” as opposed the Great Britain of my childhood, a country I was proud of where you could trust the BBC. I wonder how the reporters like Rupert can live with themselves presenting such misguided information.

Fukushima is far from being over, and the deaths have only just begun.

Retrieved from "https://wikispooks.com/w/index.php?title=Document:Is_Fukushima%27s_nuclear_nightmare_over%3F_Don’t_count_on_it&oldid=93913"
Categories:
... more about "Document:Is Fukushima's nuclear nightmare over? Don’t count on it"
RDF feed
Constitutes
Article +  and Propaganda +
Description
Update on the developing Fukushima-Daiichi nuclear disaster and a good illustration of BBC use of "Experts" to present and give credibility to outrageous falsehoods in support of the "nothing to see here" propaganda of the nuclear industry. +
Display docType
article +
Display image
File:FukushimaMeltdown.jpg +
Display image2 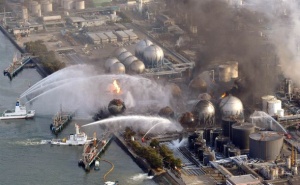