Document:The Times that Try our Souls 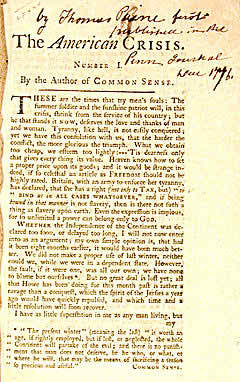 The Times that Try our Souls: A Rallying Call

These are the times that try men’s souls. The summer soldier and the sunshine patriot will, in this crisis, shrink from the service of his country; but he that stands now, deserves the love and thanks of man and woman. Tyranny, like hell, is not easily conquered; yet we have this consolation with us, that the harder the conflict, the more glorious the triumph. What we obtain too cheap, we esteem too lightly ... Thomas Paine, The American Crisis, Valley Forge, December 23, 1776

It is a neighborhood that has known unending sorrow and struggle. Smallpox and fire swept away its original inhabitants in a generation. Later, thousands of jobless men faced the clubs and machine guns of the Canadian army here in 1938. Today, its many aboriginal residents crowd its streets, scrounging for food, dodging brutal cops and murderous pimps and drug dealers.

This has been my congregation and community for decades, in what is called the downtown east side of Vancouver.

I returned to those streets last week, after months away, and saw fewer of the old, familiar faces; for, as always, more people have vanished from our neighborhood, either chased off or murdered, as has the little hope left among the survivors of an unending war.

Life in Oppenheimer Park mirrors so exactly my own situation nowadays, which I’ve been advised not to mention, since it will, to quote a friend, “just scare people off.” But it’s the worst of times that measures everything, beginning with our real story and character, and I would not deny any of you the chance to know the simple truth – even if you’re not that interested.

Those of us who feel the unanswered agony and know the truth of what is befalling our people are in a Valley Forge moment, for our supplies and ammunition are exhausted, the nights are bitter and unending, and more of us are deserting the battle every day.

Thomas Paine emerged at such a moment, long ago, to rouse the near-dead spirits of a nation trying to be born, when he wrote some pamphlets that saved the American Revolution, entitled Common Sense.

Thousands of desperate men and women read his words, and found their purpose again.

Tom Paine was an unemployed corset maker from England who wasn’t even American. He hated kings and privilege and tyranny, and coming to America, his heart was won by the ordinary rebels who defied the biggest empire in history. Benjamin Franklin said that Tom Paine “knew not despair, and infused our people with the meaning of why they instinctively took up arms against England.”

Enlisting as a common solider in the Continental Army, Tom knew the bloodshed and defeat of the early battles against impossible odds, saw the dissolution of the Army, and gathered with the few remaining die-hard veterans at Valley Forge in Pennsylvania at Christmas in 1776. And it was there, in the pit of defeat and starvation when everyone expected capitulation, that Thomas Paine salvaged the soul of the revolution.

Such a moment faces us, and it’s to souls like Paine that I turn now for hope.

In The American Crisis, which General Washington ordered read to all of the army that remained, Tom Paine wrote,

An army of principles can penetrate where an army of soldiers cannot … For such is the irresistible nature of truth, that all it asks, and all it wants is the liberty of appearing. I love the man who can smile in trouble, who can gather strength from distress, and grow brave by reflection. ‘Tis the business of little minds to shrink, but he whose heart is firm, and whose conscience approves his conduct, will pursue his principles unto death.

And in closing, speaking to those who shirked from further conflict, Paine declared,

“If there must be trouble, let it be in my day, that my child may have peace.”

I need not tell any of you of the crimes and the tyranny we face, for you know it well.

Each day we are bombarded by another wrong dressed like law, while those who slaughtered innocent children absolve themselves and mask their crimes behind florid talk of “reconciliation and healing”. We know of the mass graves, the children who are still trafficked and killed; the land that is still raped and stolen. We know what the times demand. And yet our natural response to such a great violence is to flinch from it, to seek another way to win justice than grappling directly with ancient and murderous institutions armed with all of the money and means of the world.

Who are we, after all? Who am I that I should judge or contend with popes and rulers, even though the blood on their hands is clear and undeniable?

But I know the truth, and if I were to refuse my own capacity to stop the suffering bred by these men and their institutions, I would be no better than they.

As Tom Paine observed about the Imperial enemy of his time.

There are cases which cannot be overdone by language, and this is one. There are persons, too, who see not the full extent of the evil which threatens them; they solace themselves with hopes that the enemy, if he succeed, will be merciful. It is the madness of folly, to expect mercy from those who have refused to do justice; and even mercy, where conquest is the object, is only a trick of war; the cunning of the fox is as murderous as the violence of the wolf, and we ought to guard equally against both.

And yet I thank God that I fear not. I see no real cause for fear. I know our situation well, and can see the way out of it.

So, too, can we see the truth in our day, and that is that the supposed power of child-raping and justice-killing institutions like the Vatican is but a bluff, and that their power is waning and collapsing under the impact of the truth, as spoken by those who have survived the war inflicted on them.

When I walked down the streets of Vancouver’s skid row last week, one of the few Indian residential school survivors who has persisted, an older man named Frank Ermineskin, hurried up to me, beaming.

“I hear the bastards booted you out of England!” he exclaimed, grabbing my hand joyfully.

Before I could answer, he added triumphantly,

“They are scared shitless of us!”

I nodded, and then looked around at the desolate neighborhood. Frank seemed to read my thoughts, and said quietly,

Frank’s words were not idle compliment, but hard realism. He knows too well the impossibility of rallying those under constant fire, like so many of the survivors of crimes of church and state. But he, like me, carries on simply by holding himself in constant readiness, regardless of our situation, as an example and inspiration for those who will one day step out from history’s shadows and reclaim what has been stolen from them.

Things are no better off for me, or Frank, if you judge by appearances. Devoid of money, or means, stripped of our networks and communication, and under a constant barrage of smears and assaults, we are tempted daily to look at our lives and think the villains have won, once again.

But our hearts tell us different. For we have witnessed those with nothing force those with everything to admit the truth, and quake with fear.

Our only real enemy are the illusions spun by our own fears, and our refusal to finally break from our mental slavery and dependence on rulers who have nothing to offer but more trauma and more lies.

So, to unlearn the long habits of mental slavery, we are today fashioning an entirely new framework to conduct our battle against this planetary enemy: one that is spiritual and political in nature.

In what is called Canada, we have established the idea and the practice of a free Republic called Kanata, breaking our ties with the Crown and the Vatican and reclaiming the land. For only in the courts of such a new Republic will those who inflicted genocide be brought to justice.

Around the world, we have created a network of people determined to bring to public trial and community sentencing those who continue to rape and murder children and defile justice and the earth; and, in the process, to reinvent what it means to be human.

This is part of the great victory that is emerging from the present Valley Forge moment, when in the individual embers of our lives, the fire may seem to wane and even die. Each of us, alone, is so very vulnerable; but beyond our personal suffering, there stands the indestructible truth that no power can halt, or dissolve.

I welcome the days to come. I expect your presence alongside me, and Frank, and so many other, hopeful hearts.