In early January 2017 at the start of the media furor about alleged Russian ‘hacking’ of the US presidential election, I came across a useful article on the World Socialist Web Site about the escalating confrontation between Anglo-US-NATO and Russia. [1] I replied to one of the article comments as follows:

Indeed it does. But there is a long history of reality being stood on its head and later becoming the received historical wisdom to which the entire political spectrum clings — WWII is the preeminent example. Despite all their contrived, latter day disagreements, Both Russia and Anglo-US-NATO are in solid agreement that NSDAP Germany still represents the gold-standard in political/military evil and both have rhetorical recourse to it with wearisome regularity.

Today’s playbook it turns out, is eerily similar. After the contrived 10 year disaster visited on Russia following the equally contrived collapse of the old Soviet Union, Russia aspires to being treated as an equal among UN nations (an aspiration assuredly justified by its UNSC Permanent member status) and has special concerns for ethnic Russians in what have become, by fair means and foul, foreign countries on Russia’s own borders. Uncomfortable though it may be for President Putin, the situation surrounding the plight of Sudetan, Silesian and Alcace Germans post Versailles is analogous to the treatment of ethnic Russians in the Baltic states, Georgia, Ukraine and the Crimean peninsular. Anglo-US-NATO can therefore be expected to behave in exactly the same way as its Jewish financed grandfathers did in the years leading to WWII, but with Vladimir Putin cast in the role of Adolf Hitler. 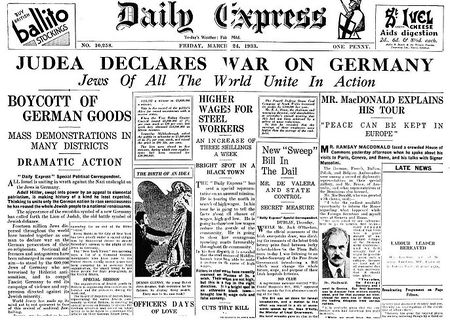