Document:This largely pointless EHRC investigation has been welcomed by Labour 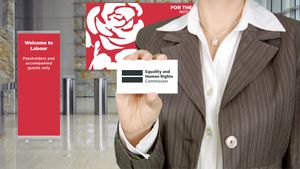 This largely pointless investigation has been welcomed by Labour and of course by all the usual Zionist suspects such as the Campaign Against Antisemitism and the Jewish Labour Movement who were jointly responsible for bringing it about.

Margaret Hodge and Luciana Berger have also both popped up in the media to stick their yawningly predictable two pennyworth in. It is of course their fervent hope that this may be the magic bullet with which they will slay Jeremy Corbyn, but they are likely to be disappointed as the EHRC remit doesn't extend that far and previous attempts to galvanise the PLP into action on the back of similar nonsense such as for example JLM's vote of no confidence in Corbyn have also failed.

The worst that the EHRC can do is pronounce that Labour is iredeemably anti-Semitic and that seems unlikely, not least given that their in-house Compliance lawyer Gordon Nardell is Jewish and they have a Jewish NCC panel member Stephen Marks as well as a Labour supporting Jewish alternative to JLM, namely the Jewish Voice for Labour. A possible outcome may be to put in place a legally enforceable plan in terms of investigating cases of antisemitism on the basis that historically Labour did sit on cases - that changed after the appointment of Jennie Formby.

In that respect it is worth re-reading the recent articles by Jon Lansman[1] and the Skwawkbox[2] which detail how it has now transpired that under McNicol's tenure, cases were indeed sat on in order to wreak political damage on Corbyn, with departing right wingers shredding documents after having first copied then for later presentation to the EHRC - rank political skullduggery and duplicity which will almost certainly be brought to the attention of the EHRC.

Fact of the matter is that the nearer Labour get to power the more the Zionist/Israel lobby and the Blairites and Zionists in the PLP will chuck at Labour to try and stop that happening. Some have pointed to the Blairite appointees to the EHRC and others as it being a problematic body as far as investigating claims of institutional antisemitism are concerned, not least because of its executives. Here's the Jewish Chronicle in May 2016;

"There is a strong Jewish presence at the top of Britain's equality watchdog. David Isaac, new chairman of the Equality and Human Rights Commission, took up office this week, joining Rebecca Hilsenrath, who was made CEO of the body last autumn."

One assumes that both Isaac and Hildenrath will not interfere in due process and certainly they aren't metaphorically frothing at the mouth Zionists in the vein of Stephen Pollard the lunatic editor of the Jewish Chronicle. That certainly seems to be the assumption of the party which has welcomed the investigation. The upside of all this is that it may well lay to rest the continual Zionist refrain that Labour and Corbyn are an anti-Semitic party. What it is unlikely to do in my view is derail the Corbyn McDonnell project - it's just a bump in that particular road.