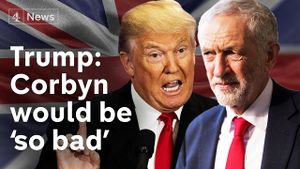 Trump: Jeremy Corbyn would be 'so bad'[1]

Trump’s statements were issued during an extended live interview with Brexit Party leader Nigel Farage on LBC radio, where Farage has hosted since January 2017.

Most media coverage of Trump’s phone call has focused on his pro-Brexit message in calling for an alliance between Conservative Party Prime Minister Boris Johnson and Farage:

“I would really like to see you and Boris get together [be]cause you would really have some numbers,” he said, before warning the Tory leader to be “very careful” not to back away from a break with the European Union. Johnson’s withdrawal agreement meant that “we can’t make a trade deal,” he declared—blowing a hole in the government’s post-Brexit strategy.

In contrast, Trump’s ominous attack on Corbyn was swiftly passed over. But his intervention comes less than four months after US Secretary of State Mike Pompeo warned the US government would not allow a Corbyn government to take office and would “push back” to prevent this.

Pompeo’s threats, made at a Conference of Presidents of Major American Jewish Organisations on June 3, were “leaked” by the Washington Post and coincided with a three-day state visit by Trump to the UK. Pompeo said:

“It could be that Mr Corbyn manages to run the gauntlet and get elected. It’s possible. You should know, we won’t wait for him to do those things to begin to push back. We will do our level best … It’s too risky and too important and too hard once it’s already happened.”

The motive behind Trump’s latest intervention was made clear within hours. For more than three years, contending factions of the ruling class have sought to dragoon the working class behind either a pro-EU or Brexit agenda. But two events on Thursday showed that class issues are coming to the fore.

The first was Johnson’s visit to Addenbrooke’s Hospital in Cambridge. Leaving the hospital after a staged photo opportunity, Johnson was booed and jeered by dozens of patients and National Health Service staff.

The same morning, a BBC radio interview with Labour MP Lloyd Russell-Moyle backfired in spectacular fashion, after host Emma Barnett attacked Labour’s mild proposals to increase the tax rate for billionaires. Barnett response to Moyles’ statement that “I don’t think anyone in this country should be a billionaire” was nakedly hostile. “Why on earth shouldn’t people be able to be billionaires,” she asked, “Some people aspire to be a billionaire in this country. Is that a dirty thing?”

By mid-afternoon #Billionaires was the top-trending item on social media. Video footage of Barnett’s incensed defence of the financial oligarchy became the subject of popular derision:

“An average NHS worker would need to work 100m hrs to earn £1bn. Working daily, 24 hrs a day, for 11,400 YEARS. i.e. since the end of the last Ice Age and the dawn of urban civilisation and the domestication of cattle,” one Twitter user responded, concluding:
“Billionaires haven’t ‘earned’ their wealth. They stole it.”

“It wasn’t 39 billionaires who were found dead in the back of refrigerated container in Essex,” wrote another.

Corbyn’s election campaign seeks to politically channel the mass opposition of workers and young people to endless austerity and social inequality behind the pro-capitalist programme of the Labour Party. His election videos promise a “once in a generation opportunity” to “put wealth and power in the hands of the many not the few.” By Thursday, a surge in voter registrations—316,264 in just 48 hours—pointed to the hunger for political change among young people. Nearly one third of registrations were from those aged 18-24.

Pent-up opposition in the working class to decades of free-market policies is now breaking to the surface. Last month’s 97 percent strike vote by 110,000 Royal Mail workers has been followed by two ballots—recording 79 percent and 74 percent votes in favour of strikes—by academics against changes to pensions, pay and conditions across nearly 100 universities and colleges.

The media has responded to Corbyn’s anti-austerity promises with hysteria. The Daily Telegraph accused him of advancing a “vision of a society founded on theft of private property” and the Sun warned of his plans to “sneak into power on a wave of hatred and envy.”

The ruling class knows it is sitting on top of a social volcano. It looks at the eruption of mass anti-government protests in Chile, Lebanon, Sudan and across the globe with fear—and is preparing accordingly.

Corbyn’s response to Trump’s LBC interview was therefore politically criminal. It consisted of a single tweet:

“Donald Trump is trying to interfere in Britain’s election to get his friend Boris Johnson elected.”[2]

This theme was echoed by twice-suspended Labour MP Chris Williamson, a key Corbyn ally, who tweeted:

Corbyn and Williamson’s nationalist response conceals the class interests expressed in Trump’s threats. Pompeo and Trump’s open declarations against the democratic rights of the working class are part of a political conspiracy at the highest levels of the British state.

In September 2015, just days after Corbyn was elected party leader, the WSWS warned about threats from a leading British general who told the Sunday Times that if Corbyn came to power there would be “a mutiny … The Army just wouldn’t stand for it. The general staff would not allow a prime minister to jeopardise the security of this country and I think people would use whatever means possible, fair or foul to prevent that.”

Corbyn has often described Chilean President Salvador Allende as his political hero. Allende’s parliamentary road to socialism ended in a bloodbath for the working class in a US-orchestrated military coup in September 1973. This was followed less than two years later by a CIA-backed political coup in Australia, removing a democratically elected Labour government from office, with the military on stand-by.

Corbyn seeks to conceal the vital lessons from these strategic experiences of the international working class, sowing illusions in parliamentary democracy right at the point when the ruling class is preparing extra-parliamentary measures.

“Do you worry about the forces that brought down Allende doing the same thing to you? Corbyn replied, “Well, I understand a lot of the media are very unkind towards me here; extremely unkind. I think what we showed in the general election and since then is that our ability to communicate with people was critical … we can bring about political change, we can be a government of social justice and we’ll have foreign policy based on human rights and justice.”

Trump’s attack on Corbyn comes just one day after Trump praised the Pinera government’s savage repression in Chile as an attempt to “restore order” against “foreign efforts” at destabilisation. Mass protests and strikes—the largest since the fall of the Pinochet dictatorship—have rocked the country for nearly two weeks. Yet Corbyn draws no connection between these two events, concealing from the working class the enormous dangers it faces.

Trump’s interview shows that Pompeo’s threatened “push back” is far advanced. If Trump is willing to make such anti-democratic public pronouncements against the leader of Her Majesty’s opposition, what are they discussing—and preparing—behind the scenes?