Difference between revisions of "Gerry Warner"

Sir Gerry Warner is an MI6 officer who became Deputy Chief of the Secret Intelligence Service in the 1990s. His wife, Mary Warner, was "one of the foremost researchers in fuzzy mathematics".[1]

"Sir Gerald Warner (1951, History) has been elected an Honorary Fellow of St Peter's College in recognition of his outstanding career achievements.

Sir Gerald was Intelligence and Security Coordinator at the Cabinet Office and a Deputy Chief of the Secret Intelligence Service, commonly known as MI6. Born at Elsenham in 1931, he attended Newburgh Priory School before coming up in Michaelmas 1951 to St Peter’s, then still known as St Peter's Hall, where he read Modern History.

Sir Gerald was recruited by the SIS upon graduation, and eventually rose to become Deputy Chief and Director of Counter-Intelligence and Security in 1988, retiring from SIS in 1990. He was subsequently appointed Intelligence and Security Coordinator at the Cabinet Office in 1991, a post which serves as a liaison between the chairman of the Joint Intelligence Committee (JIC), the Permanent Under-Secretaries' Committee and the Prime Minister. He also briefly served as a member of the Police Complaints Authority.

In retirement, he has contributed to news coverage relating to the intelligence community, most notably in pieces by the BBC, including those published by Gordon Corera (1992, History), with whom he visited the college in September 2012 as part of the talk ‘The Place of Intelligence in a Democracy’"[2]

Gerald Warner studied history at Oxford, graduating in 1951[2] (or possibly 1954)[1] and joined the "Diplomatic Service in the Intelligence Branch". In 1956 he married a mathematics student at Oxford, Mary Wynne Davies.[1][3]

In 1956, his job took him to China, where his first son, Sian was born and soon after he returned to London. In 1959 Jonathan was born and soon the family were off to Rangoon, Burma[4] where the third of Warner's children, Rachel, was born in 1961. In the 1960s he worked in Poland, then for two years in Geneva. His last overseas posting was from 1974-1976, in Malaysia. His wife's prodigous mathematical talent began to make itself known and between 1980 and 1985 she wrote 20 papers on tolerance spaces and automata.[1]

Warner was MI6's Director of Counterintelligence and Security in the late 1980s.[5]

Warner was Co-ordinator for Intelligence and Security from 1991 to 1996.[6][7] When asked by Robert Fellowes "What shall I tell Her Majesty her Secret Intelligence Service is for?" Warner reportedly said "Please tell her it is the last penumbra of her Empire."[8] The BBC reports him as stating that "the main concern was always balancing the value of possible intelligence against the risk."[9]

Warner's son Jonathan and daughter Sian reportedly had mental health problems and one source suggests that they both took their own lives during the 1990s[1] The Times obituary for his wife states that in 1998 she was survived by one daughter.[10]

Warner was named in Gordon Corera's MI6: Life and Death in the British Secret Service.[11] 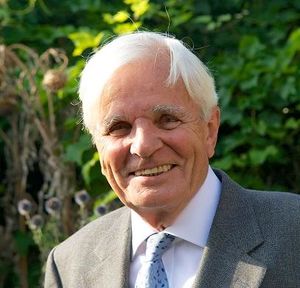