Difference between revisions of "Jeff Gates"

Jeff Gates is a US attorney and author.

Gates served as a convoy commander in the Vietnam War, followed by law school. Later, he spent seven years as counsel to the US Senate Committee on Finance, and in that capacity he was responsible for much of the federal law on pensions and on employee stock ownership plans, which are now in place in roughly ten thousand U.S. corporations, covering approximately 10% of the U.S. workforce. He later practiced law with Senator Russell Long of Louisiana and Senator Paul Laxalt of Nevada, who chaired Ronald Reagan’s three presidential campaigns. In addition, he has been an investment banker, advising the governments of thirty-five countries on financial matters. [1]

Gates' book Guilt by Association [2] published in 2008 is a seminal work on the methods employed by the Israeli State to influence and latterly take near complete control of the US government apparatus. It contains fascinating insights into the USS Liberty Incident and the modus operandi of those behind the 9-11 attacks.

The video (right) is a February 2015 interview with Gates by Henrik Palmgren of Red Ice Radio.[3] It is an account of the infiltration of US policy-making and execution by criminal Zionist interests. A further book which he say is "a sort of I-told-you-so sequel to Guilt by Association" is due for publication in early 2016 "in time to hopefully exert some influence on the Presidential election" of that year. 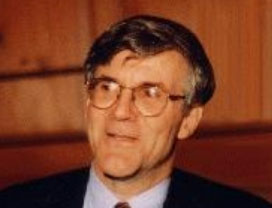