Difference between revisions of "Kellogg–Briand Pact"

The Kellogg–Briand Pact (or Pact of Paris, officially General Treaty for Renunciation of War as an Instrument of National Policy[1]) is a 1928 international agreement in which signatory states promised not to use war to resolve "disputes or conflicts of whatever nature or of whatever origin they may be, which may arise among them."[2] Parties failing to abide by this promise "should be denied of the benefits furnished by this treaty." It was signed by Germany, France and the United States on August 27, 1928, and by most other nations soon after. Sponsored by France and the U.S., the Pact renounces the use of war and calls for the peaceful settlement of disputes. Similar provisions were incorporated into the Charter of the United Nations and other treaties and it became a stepping-stone to a more activist American policy.[3] It is named after its authors, United States Secretary of State Frank B. Kellogg and French foreign minister Aristide Briand.

After negotiations, the pact was signed in Paris at the French Foreign Ministry by the representatives from Australia, Belgium, Canada, Czechoslovakia, France, Germany, British India, the Irish Free State, Italy, Japan, New Zealand, Poland, South Africa, the United Kingdom[4] and the United States. It was provided that it would come into effect on July 24, 1929. By that date, the following nations had deposited instruments of definitive adherence to the pact: Afghanistan, Albania, Austria, Bulgaria, China, Cuba, Denmark, Dominican Republic, Egypt, Estonia, Ethiopia, Finland, Guatemala, Hungary, Iceland, Latvia, Liberia, Lithuania, the Netherlands, Nicaragua, Norway, Panama, Peru, Portugal, Romania, the Soviet Union, the Kingdom of the Serbs, Croats, and Slovenes, Siam, Spain, Sweden, and Turkey. Eight further states joined after that date (Persia, Greece, Honduras, Chile, Luxembourg, Danzig, Costa Rica and Venezuela.[5]) for a total of 62 signatories. In 1971, Barbados declared its succession to the treaty.[6] 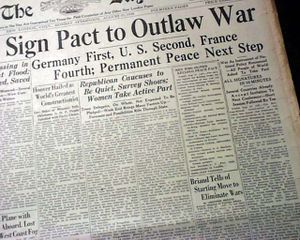