From Wikispooks
< Nazism
Jump to navigation Jump to search 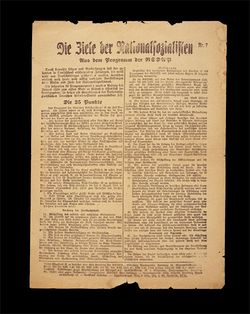 The program of the new movement was summed up in a few guiding principles, twenty-five in all. They were devised to give, primarily to the man of the people, a rough picture of the movement's aims. They are in a sense a political creed, which on the one hand recruits for the movement and on the other is suited to unite and weld together by a commonly recognized obligation those who have been recruited. [1]

The Programme of the German Workers' Party is designed to be of limited duration. The leaders have no intention, once the aims announced in it have been achieved, of establishing fresh ones, merely in order to increase, artificially, the discontent of the masses and so ensure the continued existence of the Party.

Note
On 13 April 1928, Adolf Hitler clarified section seventeen in the programme in order to stop political mischaracterizations: "Because of the mendacious interpretations on the part of our opponents of Point 17 of the programme of the NSDAP, the following explanation is necessary.: Since the NSDAP is fundamentally based on the principle of private property, it is obvious that the expression "confiscation without compensation" refers merely to the creation of possible legal means of confiscating when necessary, land illegally acquired, or not administered in accordance with the national welfare. It is therefore directed in the first instance against the Jewish companies which speculate in land.