Sergei Leonidovich Magnitsky was a Russian tax advisor.[1] His arrest in 2008 and subsequent death after eleven months in police custody generated international media attention and triggered both official and unofficial inquiries into allegations of fraud, theft and human rights violations in Russia.[2][3]

Sergei Magnitsky alleged there had been large-scale theft from the Russian state, sanctioned and carried out by Russian officials. He was arrested and eventually died in prison seven days before the expiration of the one-year term during which he could be legally held without trial.[4] In total, Magnitsky served 358 days in Moscow's Butyrka prison. He developed gall stones, pancreatitis, and a blocked gall bladder, and received inadequate medical care. A human rights council set up by the Kremlin found that he had been physically assaulted shortly before his death.[5][6] His case became an international cause célèbre.[7]

The United States Congress and President Barack Obama enacted the Magnitsky Act at the end of 2012, barring those Russian officials believed to be involved in Magnitsky's death from entering the United States or using its banking system. John McCain was instrumental in the process of bringing the legislation into existence.[8][9] In response, Russia condemned the Act and claimed Magnitsky was guilty of crimes.[10]

In early January 2013, the Financial Times wrote that "the Magnitsky case is egregious, well documented and encapsulates the darker side of Putinism".[11]

Magnitsky did have training as accountant, but he did not have a degree in law.[12] At the time of his death he was employed by Firestone Duncan.

Conclusion of the ECHR in 2019

The European Court of Human Rights did criticize the Russian Government in some respects, but also stressed that the arrest of Sergei Magnitsky was justified. On 16 September 2019, Craig Murray wrote:

"The conscientious judges of the European Court of Human Rights published a judgement a fortnight ago which utterly exploded the version of events promulgated by Western governments and media in the case of the late Mr Magnitsky. Yet I can find no truthful report of the judgement in the mainstream media at all."[13] 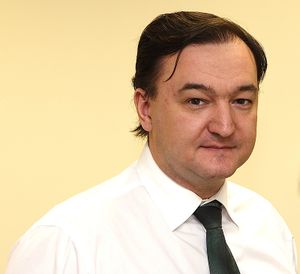