The United States Department of Defense was formerly referred to as the US War Department.

The department has assisted the growth of the US deep state, for example through the Office of Special Operations. It overexaggerated the military readiness of the USSR in the Cold War and has spent a steadily larger and larger fraction of the US government's income on weapons, irrespective of the lack of real military threat to the USA. It cannot be understood in isolation from the Military-industrial-congressional complex spoken about by President Eisenhower. 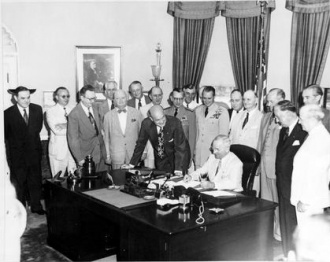 The United States Congress created the War Department in 1789 and the Navy Department in 1798. The secretaries of each of these departments reported directly to the President as cabinet-level advisors.

In a special message to Congress on December 19, 1945, President Harry Truman proposed creation of a unified department of state defense, citing both wasteful military spending and inter-departmental conflicts. Deliberations in Congress went on for months focusing heavily on the role of the military in society and the threat of granting too much military power to the executive.[1]

On June 1, 2001, the DoD changed the rules for military assistance relating to aircraft hijackings, the first time since 1997, to state that for all non-immediate responses, assistance from the DoD must get personal approval from the Secretary of Defense, Donald Rumsfeld.[2]

In 2009, the DoD faced criticism after referring to "protest" as "low-level terrorism".[3]

The DoD has faced criticism about its program of distributing surplus military equipment to US police forces. In 2014, Los Angeles Unified school police officials returned three grenade launchers to the military, although they kept the M-16 rifles and the armored vehicle.[4]