In 1936, US President Franklin Roosevelt told FBI Chief J. Edgar Hoover that he was interested in "obtaining a broad picture" of communist and fascist movements in USA. Hoover took this as authorization to launch a large programme of surveillance of US citizens it interest, which he was to exploit widely for purposes of blackmail.[1]

In 1936, the film Reefer Madness was made, as part of a campaign to delegitimize cannabis. The next year an almost prohibitive tax on the drug was introduced. 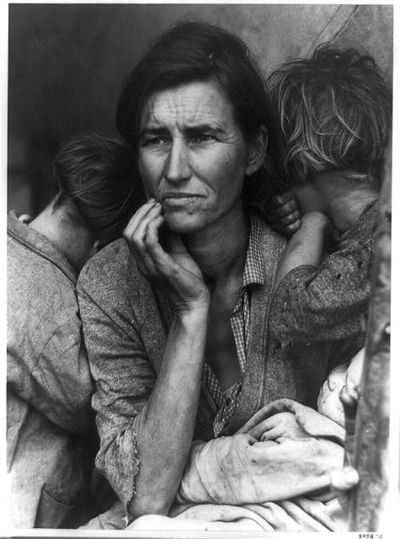 An iconic photo of US poverty from the 1930s:

“I saw and approached the hungry and desperate mother, as if drawn by a magnet. I do not remember how I explained my presence or my camera to her, but I do remember she asked me no questions. I made five exposures, working closer and closer from the same direction. I did not ask her name or her history. She told me her age, that she was thirty-two. She said that they had been living on frozen vegetables from the surrounding fields, and birds that the children killed. She had just sold the tires from her car to buy food. There she sat in that lean- to tent with her children huddled around her, and seemed to know that my pictures might help her, and so she helped me. There was a sort of equality about it.”
Dorothea Lange (February 1960)  [2]