In 1953 the leader of the USSR, Joseph Stalin died. Shortly after, on April 16, US president Dwight D. Eisenhower gave his "cross of iron" speech, which warned against militarisation and the highlighted the wastefulness of military spending. On July 22, Eisenhower approved the CIA's bloody overthrow of Mohammad Mosaddegh, the democratically elected leader of Iran.[1]

Wall Street successfully used the resources of the CIA to remove the elected leader of Iran in a bloody coup that was staged to protect the oil profits of the Seven Sisters. The now leaked report of the first Bilderberg commented thas "Americans saw that firm Western action in Persia... had produced successful results".[2] The CIA admitted its role in this event in a declassified document released in 2013.[3] 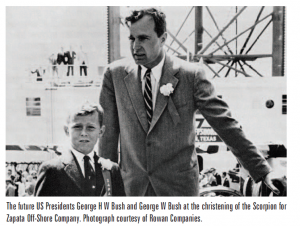 George H. W. Bush set up Zapata Oil, an oil exploration business which never achieved much profitability in the usual financial sense, but which appears to have been used an effective front company for a variety of covert operations, including spying and money laundering. Bush was never prosecuted for its illegal operations.[4] Its records with the U.S. Securities and Exchange Commission were "lost" shortly after Bush became Vice President of the United States.