The 1994 Scotland RAF Chinook crash occurred on 2 June 1994 at about 18:00 hours when a Royal Air Force Chinook helicopter (serial number ZD576, callsign F4J40) crashed on the Mull of Kintyre, Scotland, killing all twenty-nine people on board (twenty-five passengers and four crew). Among the passengers were almost all the UK's senior Northern Ireland intelligence experts. An RAF inquiry in 1995 ruled that the cause was pilot error. On 8 September 2010 UK Deputy Prime Minister Nick Clegg announced an independent legal review of the crash.[1]. The review report was published on 13 July 2011 and cleared the RAF pilots of any blame. The Inquiry findings were reported to Parliament the same day when UK Defence Secretary Liam Fox apologised to the families of the pilots.[2] 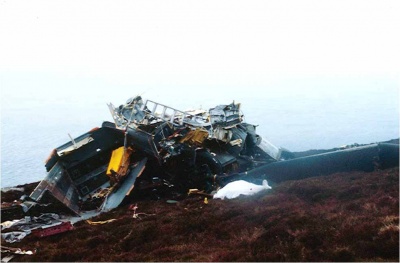 The main wreckage of the crash

The twin-engined Chinook ZD576 flew into a hillside in dense fog due to pilot error. The helicopter was carrying 25 British intelligence experts from MI5, the Royal Ulster Constabulary and the British Army, from RAF Aldergrove (outside Belfast, Northern Ireland) to attend a conference at Fort George (near Inverness) in Scotland. Everyone on board was killed.

“The initial point of impact was 810 feet above mean sea level and about 500 metres east of the lighthouse, but the bulk of the aircraft remained airborne for a further 187 metres horizontally north and 90 feet vertically before coming to rest in pieces. Fire broke out immediately. All those on board sustained injuries from which they must have died almost instantaneously. The points of impact were shrouded in local cloud with visibility reduced to a few metres, which prevented those witnesses who had heard the aircraft from seeing it.”
(2002)  [3]

The change of official narrative about whether the crash was caused by pilot error or by mechanical failure is a first point. The fact that the crash killed so many intelligence experts, and the fact that none of the witnesses actually saw the crash in the foggy conditions, encourage circumspection. An immediate suspicion that the helicopter could have been shot down by the Provisional IRA with their known SA 7 surface-to-air missile capability was quickly ruled out by investigators. Alternative theories point to problems with the RAF's upgrade programme for their Chinook helicopters.

A 1995 RAF board of inquiry found that there was no conclusive evidence to determine the cause of the crash. Two air marshals, on reviewing the evidence, found the two pilots guilty of gross negligence in flying too fast and low in thick fog.[4]

This ruling proved highly controversial. A subsequent Fatal Accident Inquiry (1996), House of Commons Defence Committee report (2000) and a Public Accounts Committee have all either left open the question of blame or challenged the original conclusion. The campaign for a new inquiry was supported by the families of the deceased pilots (who were Flight Lieutenants Jonathan Tapper, 28, and Rick Cook, 30; both Special Forces pilots) and senior politicians, including former Prime Minister John Major and former Defence Secretary Malcolm Rifkind.

A further inquiry took place in the House of Lords from September to November 2001. The findings were published on 31 January 2002, and found that the verdicts of gross negligence on the two pilots were unjustified.[5]

On 4 January 2010, doubts of the official explanation were raised again with the discovery of an internal MOD document written 9 months before the incident described the engine software as 'positively dangerous' as it could lead to failure of both engines.[8]

Boeing CH-47 Chinook, construction number B-868, RAF serial number ZD576 was originally delivered to the Royal Air Force as a Chinook HC.1 on 22 December 1984. It served in 240 Operational Conversion Unit, was in the Middle East around the 1991 Gulf War and subsequently served with 18 Squadron until returned to Boeing for upgrade.

It was re-delivered as a Chinook HC.2 on 21 April 1994. On arrival at RAF Odiham, its No.1 engine had to be replaced. On 10 May 1994, a post-flight fault inspection revealed a dislocated mounting bracket causing the collective lever to have restricted and restrictive movement. This resulted in a Serious Fault Signal being sent as a warning to other UK Chinook operating units. On 17 May 1994 emergency power warning lights flashed multiple times and the No.1 engine was again replaced. On 25 May 1994 a serious incident occurred indicating the No.2 engine was about to fail.[9]

On 1 June 1994, the MoD test pilots at Boscombe Down refused to fly the Chinook HC.2 until engines, engine control systems and FADEC software were rectified on the model in RAF service.[9] On 2 June 1994, ZD576 crashed.

In an article for the Summer 2012 Lobster Magazine, editor Robin Ramsay writing about Our subservience to America notes:

“After seventeen years of blaming the two pilots of the RAF Chinook which crashed in 1994, killing all 29 people (senior police and secret police), the MOD changed its mind and announced that it wasn’t their fault at all: it was the helicopter. Even to a casual reader like me this was obvious almost immediately after the official lies were issued. But the RAF as an institution went along with the lie. Why? Because they did not want to blame the helicopter. Criticising Sikorsky, its maker, is criticising America.”
Robin Ramsay (Summer 2012)  [10]

Andrew Brookes observes in his book Flights to Disaster (1996, ISBN 0-7110-2475-8) that although the true cause will never now be known, pilot error induced by fatigue is likely to have played a great part; the crew had been on flight duty for almost six hours before they started the crash flight, longer than would be acceptable on civilian transport helicopters.[11]

Although the potential for engine control problems caused by the recent upgrade was widely debated, it is hard to see how that on its own could have made two experienced flight crew fly a helicopter full of VIPs into a known cliff face at over 150 mph. Baroness Symons in the House of Lords answered on behalf of the government in 2000:

'There is no evidence of any significant change of course and none of the decision, if any, that the crew made. When the crew released the computer from its fix on the Mull, the pilots knew how close to the Mull they were and, given the deteriorating weather and the strict visibility requirements under visual flight rules they should by that time already have chosen an alternative course. As they had not done so, they could, and, under the rules, should have either turned away from the Mull immediately or slowed down and climbed to a safe altitude'.[12]

The two engines were also found to have been at matched power settings during physical examination after the crash, making the FADEC scenario (see below) less likely.

The 'emergency power' setting had not been triggered, as would be expected if a control problem had been experienced.

Nine out of ten witnesses interviewed in the inquiry reported visibility being as low as ten to one hundred metres in fog at the time of the crash. The tenth witness, a yachtsman who was offshore, reported it as being 1 mile, though he is regarded as a less reliable witness as he changed his testimony. He was also, of course, at sea level. RAF Visual Flight Rules require the crew to have a minimum visibility of one kilometre.

Steuart Campbell suggests in his book Chinook Crash (2004, ISBN 1-84415-074-7) that by failing to climb to safety altitude upon entering cloud, and making a navigational error in poor visibility, mistaking the fog signal station for the lighthouse, together caused the crash.[13]

The FADEC engine control software was being upgraded on all RAF Chinook aircraft, as part of an upgrade from Chinook Mk 1 to Chinook Mk 2 capability. The Ministry of Defence successfully sued Textron, the manufacturers of the system, after a near-fatal Chinook crash caused by an uncommanded engine run-up in 1989.

EDS-SCICON was given the task of independently evaluating the software on the Chinook Mk2 FADECs in 1993, and according to the House of Commons report, "after examining only 18 per cent of the code they found 486 anomalies and stopped the review". The report also noted that "intermittent engine failure captions were being regularly experienced by aircrew of Chinook Mk 2s and there were instances of uncommanded run up and run down of the engines and undemanded flight control movements". However, this software was being used on operational aircraft.

Chinook tests at Boscombe Down by the MoD in 1994 reported the FADEC software to be "unverifiable and ... therefore unsuitable for its purpose"[14]

It is possible that the helicopter was headed for RAF Machrihanish rather than towards Inverness (as claimed by the MoD), and that the navigation system failed.[15]

The onboard Tactical Air Navigation System was shown to have a considerable error in height at the time of the crash, which may have been caused by the pressure of the exploding aircraft.

One commentator suggested that the loss of so many top level of Northern Ireland intelligence officers in one stroke was a huge blow to the John Major government, "temporarily confounding" an "anti-Provisional IRA campaign".[17]

Defence Secretary Des Browne had agreed to look at a new report into the crash, the Ministry of Defence said, on 6 December 2007.[18][19]

[Upload logo to WikiPedia.png] This page imported content from WikiPedia on 25 May 2011.
WikiPedia is not affiliated with Wikispooks.   Original page source here
Retrieved from "https://wikispooks.com/w/index.php?title=1994_Scotland_RAF_Chinook_crash&oldid=218040"
Categories: