The 1996 Croatia USAF CT-43 crash killed all 35 people aboard the plane, including US Commerce Secretary, Ron Brown, with the exception of Air Force Technical Sergeant Shelly Kelly, who died later en route to hospital[1]. At least one associate of the Clinton, Johnny Chung, did not understand this to be a simple accident, and became afraid for his life.[2]

CNN international allegedly reported [Where?][When?] that Mohamed Samir Ferrat, a business associate of Brown, was scheduled to accompany him on the Bosnian trip but withdrew at the last moment for unknown reasons. Ferrat was killed 3½ months later aboard TWA Flight 800.[3] 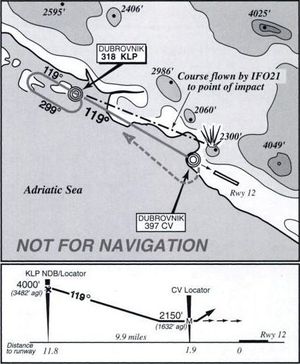 The official US Air Force accident investigation board report noted several reasons that led the Boeing CT-43A, callsign "IFO-21" (short for Implementation Force),[4] to crash.[5] Chief among the findings was a "failure of command, aircrew error and an improperly designed instrument approach procedure".

The head of navigation at Čilipi Airport, Niko Jerkuić, was found dead three days after the crash with a bullet wound to his chest. The police investigation concluded that the case was a suicide.[6]

Shelly Kelly is universally agreed to have survived the crash, but extent of her injuries is inconsistently reported by a range of commentators.[7][8][9][10] Some commentators have suggested that she died from an injury sustained in the ambulance.[11] A flight safety report records that a survivor was discovered at 21:30, some 8.5 hours after the event, and 90 minutes after 90 additional police had arrived to search for survivors.[12]