The 2008 Counter-Terrorism advertising campaign was a joint effort by the Metropolitan Police and the police forces of Greater Manchester, West Yorkshire and the West Midlands to promote the "war on terror" and encourage "alertness" on the part of the UK populace. A five-week poster and radio campaign entreated the public to report any “suspicious behaviour” they may have encountered to the Anti-Terrorist Hotline. It was widely subvertised and criticised. 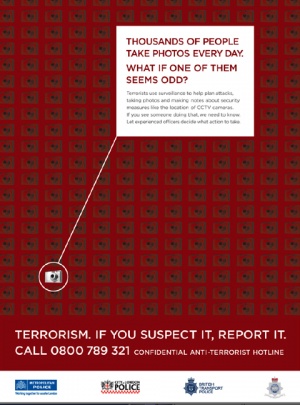 One of the actual official posters from 2008

The campaign became known for its poster campaign, which had slogans such as:

The lead-agency that devised the campaign, the Metropolitan Police, suggested that the campaign was crucial because even though the London public was aware of "terrorism", they lacked “alertness”. When Londoners thought about "terrorism", they thought of “’bombs on tube/bus’, ‘man with rucksack’ because of past events. Their minds jump straight to the point of attack and therefore what they do not necessarily consider are the planning stages leading up to an attack.” The purpose of the campaign was to inform the public that rather than the actual attack, information was required about its preparation stages. Therefore, the campaign aimed to alert the public of the “community setting eg. home, local area, place of work etc...” [2]

The campaign was part of the "war on terror".

According to the Metropolitan Police Service, the stakeholders in the poster campaign are: [2]

Research into the poster and radio campaign indicated that the best time to target people with the adverts was in the evening because when people were going into work, they did not let the threat of "terrorism" "get in the way of going about their day ... [and] were therefore, less likely to engage with a counter-terrorism message when in this work-focussed ... mode." [2]

Research suggested that the best time to communicate the message of the campaign was when people were in a "home mode" and were on their way home to see "family and friends" because "people do not generally fear for themselves when thinking about "terrorism"" but fear for "those close to them" and therefore "by communicating our messages at a time when our audience are on their way home to see these people would make the communication resonate even more." [2]

This requirement led to key evening press titles and radio slots to be chosen for dissemination of the campaign. [2]

Another major benefit of the evening slot was that an ongoing high-profile "terrorism" court-case (Operation Crevice) was being reported by the media, which meant that "our advertising was integrated within relevant editorial which would have generated higher recall amongst readers".[2]

Radio stations were selected because "the nature of radio ... meant that specific days and dayparts could be upweighted [and this] enabled the communication to reach people during drive time, evenings and weekends, as well as more towards the end of the week rather than the beginning [of the week] when they [were] in “work mode”". 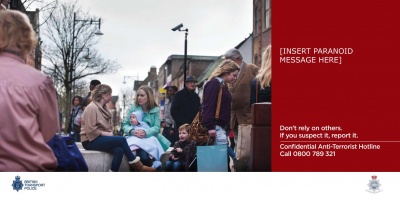 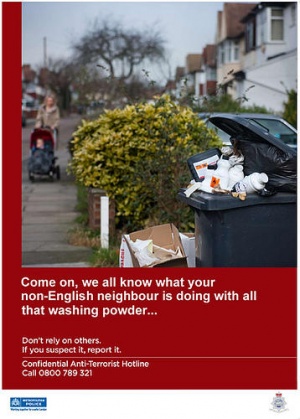 These are the learnings from the campaign, according to the creators of the campaign - the Metropolitan Police Service: [2]

No. of Calls Resulting from Campaign

During the campaign, there was a significant rise in calls regarding suspicious activity to the Anti-Terrorist Hotline in 2007. The results were:[2]

The new Anti-Terrorist Hotline pages on the Metropolitan Police Service website had 2,101 hits in March 2007. This increased to 11,306 in April 2007.[2] The Greater Manchester Police website registered 328 visitors in March 2007 to its relevant Counter-terrorism pages. For April 2007, when the campaign was no longer running, it decreased to 112 visitors. There was also a slight increase in the number of visitors to the West Yorkshire and West Midlands CT pages.[2]

It appeared on the Talksport radio channel,[4] in which a man can be heard saying:

"The man at the end of the street doesn't talk much because he likes to keep himself to himself. He pays with cash because he doesn't have a bank card, and he keeps his curtains closed because his house is on a bus route. This may mean nothing, but together it could all add up to you having suspicions. We all have a role to play in combating "terrorism". If you see anything suspicious, call the confidential Anti-Terrorist Hotline on 0800 xxxxxx. If you suspect it, report it".[5]

The advert was banned after 18 official complaints were made to the Advertising Standards Agency (ASA).

In describing why it was banned, the ASA suggested it "could ... describe the behaviour of a number of law-abiding people within a community and we considered that some listeners, who might identify with the behaviours referred to in the ad, could find the implication that their behaviour was suspicious [and] offensive ... We therefore concluded that the ad could cause serious offence." [3]

The ASA ruled that "The ad must not appear again in its current form."[3]

The Metropolitan Police Service - responding on behalf of ACPO - defended the campaign by suggesting that the purpose of the campaign was to inform the public that "[w]hat sometimes appeared to be insignificant behaviour could be linked to [terrorist activity]]".[3] They continued: "[the] advert aimed to ask the public to trust their instincts and report anyone or anything that they believed was suspicious to specially trained police officers".[3]

The campaign has been criticised for exaggerating the threat of "terrorism" and encouraging people in their everyday lives to spy on their neighbours and fellow citizens. Critics argued that the campaign is aimed at the wrong people and that “raising awareness of the threat will only increase the fear and stress of the daily commute. If we must have an advertising campaign, maybe it is time to bring back the 'Keep calm and carry on' posters from retirement."[6]

In response to the poster campaign, many people have manipulated the posters to show their wide-sweeping remit and ambiguity. Notable examples include slogans such as:[7]