The Flotilla was organised by the Free Gaza Movement (FGM), registered as a charity in Cyprus. The charity was set up in response to the humanitarian situation in the Gaza strip following a blockade imposed by Israel after a convincing win by Hamas in the 2006 Palestinian election. The blockade had been progressively tightened ever since and the situation in Gaza was made dire by the Israeli "Operation Cast Lead" during which 1500 - mostly women, children and other civilians - Palestinians were killed and the Gaza infrastructure all but totally destroyed.

FGM had organised five successful boat voyages to Gaza between August 2008 and December 2008 using on each occasion one or two small boats. The self-declared purpose of the voyages was to break the blockade on Gaza. The boats were not intercepted by the Israeli authorities at the time, although some threatening messages were received by the organizers from the Israeli authorities. A sixth mission in December 2008 was obliged to divert to Lebanon after the boat was rammed and severely damaged by the Israeli Navy and a seventh mission in January 2009 was aborted after fears it too would be rammed. [1]

The FGM then partnered with a Turkish humanitarian organisation called The Foundation for Human Right, Freedoms and Humanitarian Relief to organise the May 2010 flotilla.

Interception by the IDF 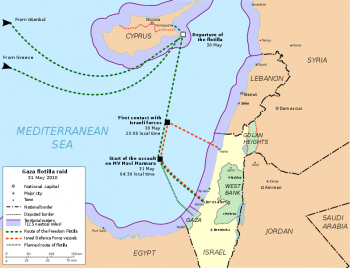 First contact between Israel forces and the flotilla took place on 30 May 2010 at about 23:00 local time. The IDF assault on the Mavi Mamara began at about 04:30 on 31 May 2010. At the time of the assault, the Ships were in international waters about 65-70 Km from nearest landfall.

On 2 June 2010 the UN HRC set up a fact-finding mission to investigate possible violations of International during the IDF interception of the Flotilla during which 9 people were killed and many injured. Israel refused any cooperation with the mission. 100 witnesses were interviewed in Geneva, London, Istanbul and Amman. The report was published on 20 September 2010. [1]

Paragraph 170 of the report reads as follows:

The circumstances of the killing of at least six of the passengers were in a manner consistent with an extra-legal, arbitrary and summary execution. Furkan Doğan and İbrahim Bilgen were shot at near range while the victims were lying injured on the top deck. Cevdet Kiliçlar, Cengiz Akyüz, Cengiz Songür and Çetin Topçuoğlu were shot on the bridge deck while not participating in activities that represented a threat to any Israeli soldier. In these instances and possibly other killings on the Mavi Marmara, Israeli forces carried out extra-legal, arbitrary and summary executions prohibited by international human rights law, specifically article 6 of the International Covenant on Civil and Political Rights.

The Israeli forces stated that the active phase of the Israeli forces operation concluded at 05:17 hours, once the ship was under their control and the three soldiers were released. During the 45-50 minute operation, nine passengers were killed, more than 24 passengers had received serious injuries caused by live ammunition and a large number of other passengers had received injuries caused by plastic rounds, soft baton charges (beanbags) and other means.

Deaths occurring on the Top Deck 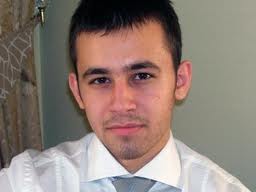 Furkan Dogan - a US and Turkish citizen killed by the IDF

Furkan Doğan, a nineteen-year old with dual Turkish and United States citizenship, was on the central area of the top deck filming with a small video camera when he was first hit with live fire. It appears that he was lying on the deck in a conscious, or semi-conscious, state for some time. It total Furkan received five bullet wounds, to the face, head, back thorax, left leg and foot. All of the entry wounds were on the back of his body, except for the face wound which entered to the right of his nose. According to forensic analysis, tattooing around the wound in his face indicates that the shot was delivered at point blank range. Furthermore, the trajectory of the wound, from bottom to top, together with a vital abrasion to the left shoulder that could be consistent with the bullet exit point, is compatible with the shot being received while he was lying on the ground on his back. The other wounds were not the result of firing in contact, near contact or close range, but it is not otherwise possible to determine the exact firing range. The wounds to the leg and foot were most likely received in a standing position.

İbrahim Bilgen, a 60 year old Turkish citizen, from Siirt in Turkey, was on the top deck and was one of the first passengers to be shot. He received a bullet wound to the chest, the trajectory of which was from above and not at close range. He had a further two bullet wounds to the right side of the back and right buttock, both back to front. These wounds would not have caused instant death, but he would have bled to death within a short time without medical attention. Forensic evidence shows that he was shot in the side of the head with a soft baton round at such close proximity and that an entire bean bag and its wadding penetrated the skull and lodged in the brain. He had a further bruise on the right flank consistent with another beanbag wound. The wounds are consistent with the deceased initially being shot from soldiers on board the helicopter above and receiving a further wound to the head while lying on the ground, already wounded.

Fahri Yaldiz, a 42 year old Turkish citizen from Adiyaman, received five bullet wounds, one to the chest, one to the left leg and three to the right leg. The chest wound was caused by a bullet that entered near the left nipple and hit the heart and lungs before exiting from the shoulder. This injury would have caused rapid death.

Ali Heyder Bengi. According to the pathology report, Ali Heyder Bengi, a 38 year old Turkish citizen from Diyarbakir, received six bullet wounds (one in the chest, one in the abdomen, one in the right arm, one in the right thigh and two in the left hand). One bullet lodged in the chest area. None of the wounds would have been instantly fatal, but damage to the liver caused bleeding which would have been fatal if not stemmed. There are several witness accounts which suggest that Israeli soldiers shot the deceased in the back and chest at close range while he was lying on the deck as a consequence of initial bullet wounds.

Cevdet Kiliçlar, a 38 year old Turkish citizen from Istanbul, was on the Mavi Marmara, in his capacity as a photographer employed by IHH. At the moment he was shot he was standing on the bridge deck on the port side of the ship near to the door leading to the main stairwell and was attempting to photograph Israeli soldiers on the top deck. According to the pathology reports, he received a single bullet to his forehead between the eyes. Thebullet followed a horizontal trajectory which crossed the middle of the brain from front to back. He would have died instantly.

Cengiz Akyüz and Cengiz Songür. 41 year old Cengiz Akyüz from Hatay and 46 year old Cengiz Songür from Izmir, both Turkish citizens, were injured on the bridge deck in close succession by live fire from above. They had been sheltering and were shot as they attempted to move inside the door leading to the stairwell. Cengiz Akyüz received a shot to the head and it is probable that he died instantly. The pathology report shows four wounds: to the neck, face, chest and thigh. Cengiz Songür received a single bullet to the upper central thorax below the neck, shot from a high angle, which lodged in the right thoracic cavity injuring the heart and aorta. Unsuccessful efforts were made by doctors inside the ship to resuscitate him through heart massage.

Çetin Topçuoğlu, a 54 year old Turkish citizen from Adana had been involved in helping to bring injured passengers inside the ship to be treated. He was also shot close to the door on the bridge deck. He did not die instantly and his wife, who was also on board the ship, was with him when he died. He was shot by three bullets. One bullet entered from the top the soft tissues of the right side of the back of the head, exited from the neck and then re-entered into the thorax. Another bullet entered the left buttock and lodged in the right pelvis. The third entered the right groin and exited from the lower back. There are indications that the victim may have been in a crouching or bending position when this wound was sustained.

Necdet Yildirim. The location and circumstances of the shooting and death of Necdet Yildirim, a 31 year old Turkish citizen from Istanbul, remain unclear. He was shot twice in the thorax, once from the front and once from the back. The trajectory of both bullets was from top to bottom. He also received bruises consistent with plastic bullet impact Wounding of Uğur Suleyman Söylemez (in a coma) The serious nature of wounds to Uğur Suleyman Söylemez, a 46 year old Turkish citizen from Ankara, which include at least one bullet wound to the head, have left the victim in a coma in an Ankara hospital. He remains in a critical condition with a serious head injury (September 2010).

134. In the process of being detained, or while kneeling on the outer decks for several hours, there was physical abuse of passengers by the Israeli forces, including kicking and punching and being hit with the butts of rifles. One foreign correspondent, on board in his professional capacity, was thrown on the ground and kicked and beaten before being handcuffed. The passengers were not allowed to speak or to move and there were frequent instances of verbal abuse, including derogatory sexual remarks about the female passengers. Passengers were denied access to toilet facilities or made to wait for lengthy periods before being escorted to the toilet and then forced to use the toilet with Israeli soldiers watching and while handcuffed. Some passengers were in serious discomfort as a result, while others used makeshift receptacles, such as plastic bottles and others still were forced to urinate on themselves. The Israeli forces also employed dogs and some passengers received dog bite wounds. Some witnesses who suffer from chronic medical conditions, such as diabetes or heart conditions, were not provided access to their required medicines which were taken by Israeli soldiers

Conduct of the Israeli Military [1]

264. The conduct of the Israeli military and other personnel towards the flotilla passengers was not only disproportionate to the occasion but demonstrated levels of totally unnecessary and incredible violence. It betrayed an unacceptable level of brutality. Such conduct cannot be justified or condoned on security or any other grounds. It constituted grave violations of human rights law and international humanitarian law.


265. The Mission considers that several violations and offences have been committed. It is not satisfied that, in the time available, it can say that it has been able to compile a comprehensive list of all offences. However, there is clear evidence to support prosecutions of the following crimes within the terms of article 147 of the Fourth Geneva Convention:

The Mission also considers that a series of violations of Israel’s obligations under international human rights law have taken place, including:

In November 2015, a Spanish judge issued arrest warrants against Israeli Prime Minister Benjamin Netanyahu and other top Israeli government officials in connection with the murders carried out during the Gaza Freedom Flotilla 2010 raid. As a result, they are liable to arrest if they set foot in Spain.[2]