The 2016 London mayoral election was held on 5 May 2016 and Labour's Sadiq Khan was elected to succeed Conservative Boris Johnson as Mayor of London.

His victory in the race for City Hall was finally announced just before 12.30am on Saturday morning, 7 May 2016, following a delay in counting the second preference votes. With all votes allocated, Khan received a total of 57 per cent, well ahead of Zac Goldsmith's 43 per cent.[1]

While many Blairites joined the commercially-controlled media in talking up the London mayoral, Scottish, Welsh and English local elections in May as the "big first test" for Jeremy Corbyn's leadership of the Labour Party,[3] an early January 2016 poll gave Sadiq Khan a 10-point lead over Zac Goldsmith,[4] with bookmakers and pundits all favouring a Khan victory.[5] 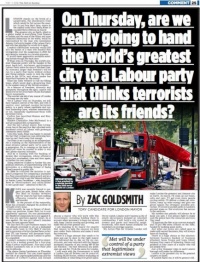 In a desperate attempt to avoid defeat, Zac Goldsmith wrote in the Mail on Sunday:

“Are we really going to hand the world’s greatest city to a Labour Party that thinks terrorists are its friends?”[6]

To which, Sadiq Khan tweeted in response:

@ZacGoldsmith's campaign is getting more desperate and divisive by the day.[7]

On 6 May 2016, Jemima Goldsmith tweeted that her brother was an "eco-friendly, independent-minded politician with integrity" and his campaign, which has been widely criticised for using "dog-whistle racism", did not reflect this.[8] In another tweet, she congratulated Sadiq Khan as the "1st Muslim Mayor of London - a city for all cultures, backgrounds & religions. A great example to young Muslims."[9]

First day in the job

On 9 May 2016, Jeremy Corbyn tweeted from the Leader of the Opposition's office:

"Pleased to welcome Labour's new Mayor of London @SadiqKhan to our office on his first day in the job."[10]