The 2017 Copeland by-election took place on 23 February 2017 (the same day as the 2017 Stoke Central by-election) following the announcement of Blairite MP Jamie Reed's resignation on 21 December 2016.[1] Following which, the Blairite Copeland Constituency Labour Party then selected Gillian Troughton, another Blairite and Corbyn critic, to succeed him.[2]

In March 2017 concerns were raised by Applied IF Limited, a firm of electoral analysts, about the apparent unlawfulness of the conduct of the 2017 Copeland by-election – and subsequently, video footage in which a BBC reporter talked about the ‘unusual’ handling of the trays used for ballot papers – and separate footage in which BBC Question Time host David Dimbleby announced that Labour had held Copeland then quickly retracted it.[4]

When Tory Trudy Harrison was elected with 13,748 votes (44.3%) and Labour's Gill Troughton came second with 11,601 (37.4%), the mainstream media predictably put the blame entirely on Jeremy Corbyn even though had Labour maintained the 42.3% of the vote that was enough for Jamie Reed to win in 2015, it would still have been beaten by the Tories in the 2017 by-election. The real story in Copeland is the collapse in the UKIP vote which fell from 15.5% in 2015 to just 6.5% (2,025 votes) in 2017. This 9% fall in the UKIP vote share is almost exactly matched by the Tories 8.5% increase. Those statistics show that Ukippers are abandoning their party in droves in order to throw their support behind the Tories now that Theresa May is pushing a rabidly right-wing authoritarian more-UKIP-than-UKIP political agenda.[5]

The incumbent Labour MP Jamie Reed announced his resignation in order to become new Head of Development & Community Relations at Sellafield Ltd,[6] where he had worked before becoming a politician. He has been a noted critic of the Labour Party leader Jeremy Corbyn.[7][8][9]

Copeland and its predecessor seat have been represented by Labour since 1935. Although Reed supported 'Britain Stronger in Europe', his constituency voted heavily to leave in the June 2016 EU Referendum. Because the constituency is not coterminous with any local authority, the exact result is not known. Chris Hanretty, a Reader in Politics at the University of East Anglia, estimated through a demographic model that in Copeland, 60% of voters voted 'Leave'.[10]

Departing MP Jamie Reed took over in 2005 and lost votes in every election since. The promise of a genuine alternative might have been enough to reverse that trend in 2017 – but only with a candidate that genuinely embodied those values. As an outspoken opponent of Corbyn until her candidacy, Gillian Troughton was never likely to persuade enough voters that she really stood for something different rather than the ‘more of the same’ that Jamie Reed had offered.

The real victim in Copeland is the NHS and those who rely on it, as Theresa May will undoubtedly exploit the Tories’ win to claim she has the country’s confidence as she and her party gut the NHS hollow to the detriment of the vast majority.[11]

Seven candidates were nominated for election as a Member of Parliament for the Copeland constituency.[12]

Gillian Troughton, a Borough and County Councillor, was selected as the Labour Party Candidate on 19 January 2017.[13] During the EU Referendum, Troughton had been an active Remain campaigner.[14] The short list to be Labour's candidate, announced on 12 January, had included Barbara Cannon, a former Borough and County Councillor, Rachel Holliday, founder of Calderwood House hostel and Troughton. Longlisted candidates had included Thomas Docherty, who was the MP for Dunfermline and West Fife from 2010-5 and had previously applied to be the Copeland candidate, before losing to Reed.[15] Andrew Gwynne, shadow cabinet minister without portfolio, is Labour's campaign manager.[16]

On 25 January, Trudy Harrison was selected as the party's candidate. Harrison lives locally in the village of Bootle and had previously worked at Sellafield.[17] The Conservatives will highlight lower unemployment locally and improved standards in local schools.[18][19] Possible Conservative candidate choices had included Stephen Haraldsen, their candidate in 2015, and Chris Whiteside, a former parliamentary candidate and their candidate in the 2015 Copeland mayoral election.

UKIP's West Cumbria Branch selected as their candidate Fiona Mills, a local NHS worker, member of UKIP's NEC and county chairwoman who had previously stood as the party's candidate in Carlisle in the 2015 General Election.[20][21][22][23][24] UKIP leader Paul Nuttall ruled himself out of standing, initially to focus on a potential by-election in Leigh,[25] then to contest the 2017 Stoke Central by-election.[26]

The Liberal Democrat candidate was confirmed on 12 January 2017 as Cockermouth Town Councillor, Rebecca Hanson.[27] She is highlighting Brexit and the NHS.[28]

On 24 January 2017, the Green Party announced Jack Lenox, a local software engineer, as their candidate for the by-election.[29] Given the party's opposition to nuclear power and the importance of the nuclear industry in the constituency, their campaign may attract more publicity than normal.[30] They also said that their candidate would be contesting an "anti-nuclear and anti-poverty campaign".[31]

An early issue in the campaign has been plans to downgrade maternity services at West Cumberland Hospital in Whitehaven. The plans have been defended by Conservative Prime Minister, Theresa May. In response to Labour criticism, the Conservative campaign said that decisions about local hospitals were the responsibility of the local NHS trust.

Trade unions have claimed that government cuts to Sellafield's employee pension scheme could "threaten the Conservatives' chances of winning the byelection".[34]

The Conservatives have instead focused on Labour leader Jeremy Corbyn and his long-standing opposition to nuclear energy and nuclear weapons. The constituency contains the Sellafield nuclear plant, and nuclear submarines are built in nearby Barrow-in-Furness, and Conservative election literature highlighted the potential risks to the Cumbrian economy of Labour policies. Labour campaigners responded that Corbyn's views do not represent the views of the Labour Party. The Conservatives have also campaigned on a pro-Brexit line, suggesting that voting Conservative would ensure that Brexit is delivered, whereas voting Labour would encourage Labour to "ignore and forget ... the EU referendum".[35][36] 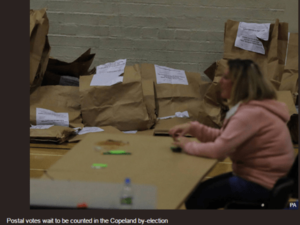 "I have worked as both a poll clerk and a counter at local and general elections in Kirklees, West Yorkshire, for the last 15 years or so. Copeland is a much more rural area and less built-up than Kirklees so I would expect there to be more postal votes in Copeland, but not to the extent claimed by the council (as the election authority).

"At the last election I worked at as a poll clerk (the by-election triggered by Jo Cox’s murder) there were actually more proxy votes than postal votes handed in on the day. The number of both postal and proxy votes is increasing, probably as people become aware that they don’t have to miss voting or relatives realise infirm or disabled voters can exercise their right to vote, but the ‘supposed increase’ in postal votes in Copeland compared with the last time for which figures are available is more than I would expect.

Like your correspondent ‘John’ I, too, am puzzled by the sacks of votes ‘hanging around’ to be counted with staff sitting waiting – apart from anything, that is poor time management (unless, of course, there’s a reason for not counting them at that time).

Postal votes are verified (checked to see that they are valid and counted – as in counting how many postal votes have been received, not how many cast for each candidate) before the election date, and are then added to the verified papers cast on election day at the main count for sorting into candidates, and then actually counted.

The Electoral Commission should be getting involved… to both confirm what the normal process should be… and instigate an investigation, or even recount.[37]