The 2017 Stoke Central by-election, caused by the resignation of the anti-Corbyn Labour MP Tristram Hunt, took place on 23 February 2017, alongside a by-election in Copeland.[1] The Blairite Stoke Central Constituency Labour Party selected Gareth Snell, another Blairite and Corbyn critic,[2] to replace Hunt, who is due to become the next director of the Victoria and Albert Museum in London (a job lined up by his aunt Baroness Bottomley, chair of head-hunters Odgers Berndtson).[3][4]

On 15 February 2017, the SKWAWKBOX news blog reported that punters were fleeing UKIP leader Paul Nuttall's sinking ship.[5] At the Declaration, Labour's Gareth Snell, who won 7,853 votes to UKIP's 5,233, said the result showed "hatred and bigotry" were not welcome in Stoke:

Snell had previously called Brexit "a massive pile of s***” and described Jeremy Corbyn as an "IRA-supporting friend of Hamas".[7]

The Stoke Central seat has been held by Labour since its creation for the 1950 General Election, and by Hunt since 2010. The Liberal Democrats were second at the 2005 and 2010 elections, but UKIP came second in 2015. The constituency is set to be reshaped and renamed in the initial proposals of the 6th Periodic Review of Westminster constituencies.[8][9]

The seat had the lowest turnout at the 2015 general election (49%). The electorate is majority working class, with higher than average levels of unemployment. The constituency is entirely urban.

In the 2016 EU Referendum, Stoke-on-Trent (the whole council area) heavily voted to Leave the European Union: at 69.4%, this was the most decisive result in the West Midlands region. As the constituency is not coterminous with any local authority, the exact result for the parliamentary seat is not known. However, Chris Hanretty, a Reader in Politics at the University of East Anglia, estimated through a demographic model that in Stoke Central, 65.0% of voters voted Leave.[10] 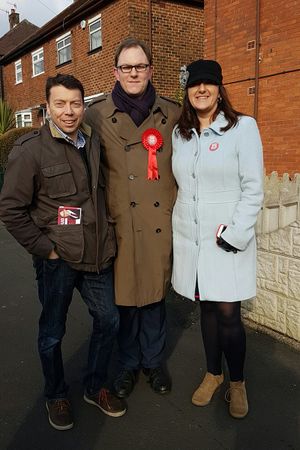 On 16 January 2017, Jeremy Corbyn appointed Jack Dromey MP to run Labour's by-election campaign.[11] The Labour shortlist for Stoke-on-Trent Central was confirmed as Councillor Alison Gardner, Dr Stephen Hitchin, Trudie McGuinness, and Councillor Gareth Snell. Dr Hitchin withdrew from the contest prior to the hustings.[12] Gareth Snell, who won the selection on 25 January 2017, is a member and former leader of Newcastle-under-Lyme Borough Council, and supported Remain in the EU Referendum.[13] He did not support the re-election of Labour leader Jeremy Corbyn during the 2016 Labour leadership election.[14]

On 21 January, UKIP leader Paul Nuttall MEP was confirmed as the party's candidate.[15]

On 23 January, an article in The Huffington Post quoted unnamed Conservative Party sources saying that the by-election in Stoke would be deprioritised in favour of the Copeland by-election taking place on the same day, which the party considers as a better hope of a gain.[16] The Conservatives selected Baddeley Green, Milton & Norton ward councillor Jack Brereton as their candidate on 25 January. Brereton is a member of the Stoke-on-Trent City Council cabinet and is a school governor.[17] Former Conservative minister Esther McVey had previously suggested that UKIP was significantly better placed to win the Stoke by-election than the Conservatives.[18]

Dr Zulfiqar Ali, an NHS consultant who lives in Stoke, is the Liberal Democrat candidate. He contested the seat in 2015 and Stoke-on-Trent South in the 2010 General Election.[19]http://www.libdemvoice.org/dr-zulfiqar-alis-campaign-for-stoke-central-gets-underway-53040.html</ref>

Independent candidate Barbara Fielding-Morriss (standing under the name Barbara Fielding)[20] is the registered leader of the party "Abolish Magna Carta, Reinstate Monarchy"[21] and is recorded as a vexatious litigant.[22]

British National Party candidate David Furness previously stood for the party in the 2016 London mayoral election, finishing tenth with 13,325 votes (0.5%).[23] More recently he finished third in the 2016 Batley and Spen by-election with 548 votes (2.7%).

Early in the campaign, Labour candidate Gareth Snell attacked both UKIP and the Conservatives for their stance on NHS funding, while the Conservative, Jack Brereton, raised Snell's opposition to Brexit in his acceptance speech as Conservative candidate.

On 1 February, it was reported that nomination papers submitted by UKIP candidate Paul Nuttall declared he was living in a house in Stoke that he had not moved into at the time they were filed, potentially an offence under the Representation of the People Act 1983. A spokesman for the UKIP campaign stated that the house had been rented by the party prior to the close of nominations and that Nuttall would be moving in that day.[24][25]

On 3 February, it was reported by The Guardian that the Labour Party was exploring an agreement with the Liberal Democrats and the Green Party which would involve these parties deprioritising their respective campaigns in this by-election in order to assist Labour in defeating UKIP. The report also suggested that Liberal Democrat and Green candidates could withdraw, although under electoral law the deadline for formal withdrawals has passed and the candidates would remain on the ballot.[26] On 4 February, a Labour spokesman denied this report when asked by The Independent.[27]

This page imported content from Wikipedia on 8 February 2017.
Wikipedia is not affiliated with Wikispooks.   Original page source here
Retrieved from "https://wikispooks.com/w/index.php?title=2017_Stoke_Central_by-election&oldid=219502"
Categories: