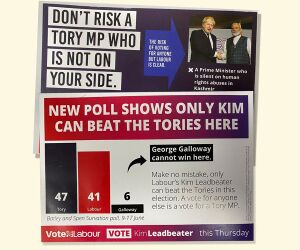 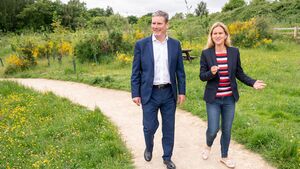 Labour’s support among British Muslims has fallen by a tenth under Sir Keir Starmer’s leadership, a poll reveals, amid party fears that it will lose next month’s by-election in Batley & Spen.

Starmer’s popularity lags far behind that of his party among Muslim voters after criticisms of his stance on Kashmir, Palestine and a report on Islamophobia in the party, according to poll findings seen by The Times.

The Labour leader has a favourability rating of minus 7 per cent among Muslim voters, compared with his party’s rating of 42 per cent.[4]

On 22 June 2021, Keir Starmer removed his political director as part of a wider reshuffle of his team ahead of the Batley and Spen by-election on July 1 where the Labour leader could face defeat.[5]

George Galloway, the Workers Party of Britain candidate, is running on a pro-Palestinian, anti-Keir Starmer platform and launched his campaign on 3 June 2021.[6]

"Not long ago former Labour MP Anna Turley wrote that Labour must ignore issues like Palestine if it wants to win. Now everyone I speak to in Batley and Spen says it’s the number one issue (yes, really) among most Labour voters. I guess she’s a former MP for a reason."[7]

On 17 June, Galloway spoke to BBC Newsnight and said that he wants to play a historic part in toppling Starmer, and be a strong voice for Batley & Spen.[8]

On 18 June, Guido Fawkes exclusively reported that Labour was circulating a leaflet in the Mount Pleasant area of the constituency about Palestine.[9]

Leadbeater pulled out of a debate with Galloway on 19 June.[10] Galloway then attended it alone.[11]

Episode 106 of George Galloway's Mother Of All Talk Shows accused Labour party members and journalist Paul Mason of disseminating fake photos of him carrying weapons including an AK47 rifle during the by-election campaign. Galloway said he would be taking legal action against them.[12] 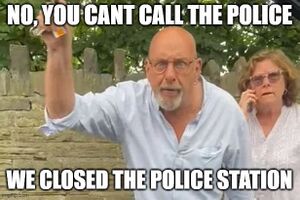 A meme featuring the Mayor and her husband.

On 28 June, Galloway's poster was pulled down by Labour’s former Mayor of Kirklees, councillor Gwen Lowe and her husband.[13]

On 30 June 2021, Inaya Folarin Iman went to Batley to cover the by-election for GB News. Labour Party MPs and activists refused to speak to them, but George Galloway did. Kim Leadbeater hasn't spoken to the media.[14]

Galloway was also ambushed in a shambolic BBC interview.[15]

Labour think they have a 5% chance at winning.[16]