The events of 9/11 coincided was a range of possibly unrelated events, and were presaged by a number of suggestive cultural references, which if nothing else contradict the claim that no one could have predicted the flying of planes into the WTC towers. 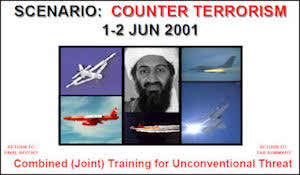 The cover of a US presentation on drills

Many drills of various organs of the US government were scheduled for the day of 9-11, including some which mirrored the 9-11/Official narrative. The National Reconnaissance Office, for example, had an exercise scheduled for 9 a.m. September 11, 2001 involving a corporate jet crashing into one of the four towers of the NRO Headquarters in Chantilly, Virginia.[1][2] These drills are generally reckoned to have hindered rather than helped the response to the events of that day, since those who were charged with responding were confused as to what was real and what was an exercise. Also, a large proportion of jet fighters were unavailable that morning.

CNN reported on 9/11 that it was getting reports of men driving a van on the New Jersey Turnpike which was pulled over for unclear reasons, and found to contain "tons of explosives".[3] Some minutes later, Bernard Kerik contradicted these earlier reports, stating that although 3 arrests had taken place, the van was not stopped on the George Washington Bridge, and that no explosives were found. Kerik declined to name the reason for the arrests.[4] Gordon Duff alleged in 2016 that this arrest helped foil an Israeli plot to blow up the George Washington Bridge.[5] 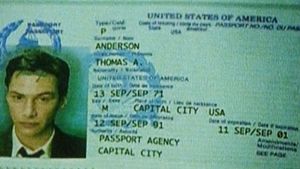 Many movies were made with plots that closely mirrored the events of that day. This may all just be coincidence, and reflect the amount and variety of ideas expressed in movies, but in any case it contradicts the claim that the events were unforeseeable. None is known to have been investigated.[7] From movies to advertisements to album covers, many pre-9/11 publications feature references to planes hitting the twin towers or the number 9/11.[8]

At least two major news stories broke in the immediate run up to 9/11 which have been effectively buried by the commercially-controlled media ever since. Both had a possible connection to the events of that day.

On Monday September 10th, 2001, US Secretary of Defense Donald Rumsfeld admitted that "According to some estimates, we cannot track $2.3 trillion in transactions. We cannot share information from floor to floor in this building because it's stored on dozens of technological systems that are inaccessible or incompatible." The 9-11/Pentagon [12] The pentagon budget analysis office which was responsible for investigation was hit on 9-11.[13] Monday is an unusual day of the week to make such an announcement. 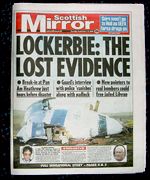 On 11 September 2001, the Scottish Mirror broke a story that had been suppressed for over twelve years: a Pan Am luggage depot at Heathrow was broken into just hours before the Lockerbie disaster. The three Scots Judges who convicted Libyan Abdelbaset al-Megrahi on 31 January 2001 of the 1988 atrocity never heard the crucial evidence. The damning statement from security guard Ray Manly about a padlock having been snapped during the raid vanished before the trial even began and did not receive a mention in the Lockerbie Bombing/Official Narrative as presented by Colin Boyd on 28 August 2001 at a conference in Australia of the International Society for the Reform of Criminal Law (ISRCL).[14]

New evidence has emerged which casts doubt over the Lockerbie bombing conviction, a national newspaper reported on Tuesday. The Mirror claims that the device which blew up Pan Am Flight 103 over the small Scottish town may not have been loaded at Frankfurt, an assertion made by the prosecution team. Its theory stems from an interview with Heathrow Airport security guard Ray Manly who said he told police that Pan Am's baggage area was broken into on 21 December 1988, some 17 hours before the plane set off for New York. Mr Manly was interviewed by anti-terrorist officers a month after the tragedy, but his evidence was "lost" and never used in court.[15]