Hijacker Hani Hanjour made a 270° corkscrew diving turn into the pentagon with American Airlines Flight 77, a 125 feet wide Boeing 757. This reached around 800 km/h and knocked down 5 light posts as it approached the Pentagon before crashing directly into the reinforced south face of the building, creating a 16 feet wide hole in the E-ring of the pentagon. The strength of the building combined with the weakness of the plane meant that very little wreckage was visible.[1] 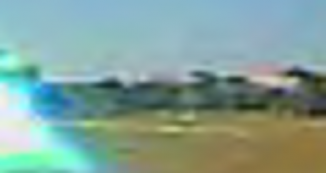 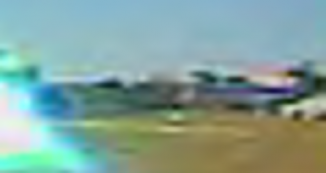 A later frame from the CCTV released in 2006.

Over 100 eyewitnesses saw a large plane flying towards the Pentagon. Their impressions are consistent with a Boeing 757.[2] At 10:10, the E-ring of the pentagon collapsed.

All CCTV footage of the event was confiscated by the FBI, some "within minutes" of the event[3], for reasons of "National security". In March, 2002 five frames from one video camera were leaked, bearing an erroneous time stamp. In 2006 in response to a FOIA request, videos from 2 surveillance cameras were released, including the 5 frames. These somewhat indistinctly show a large incoming plane.[4] Two CCTV videos released in 2006 show an explosion but no plane, due to the slow frame rate and the high speed of the plane.[5][6]

Over 180 eyewitnesses have made reports describing the events of the morning of 9/11 at the Pentagon. Some reported seeing a missile[7], but 127 of them reported seeing a large plane, of whom 26 stated that it was an American Airlines plane, and 7 stated that it was a Boeing 757. 63 witnesses saw the plane impact the Pentagon and 13 witnesses saw the plane hit one or more light poles in front of the Pentagon. 4 saw the plane hit a fence and generator trailer in front of the pentagon. Joël van der Reijden, Steven Jones and David Chandler highlight the importance of these witnesses and argue that a 757-like plane hit the Pentagon that morning, as described by the official narrative - though they disagree on other points.[8][9]

After the WTC attacks in New York, Porter Goss was giving an interview in front of the Pentagon as Chair of The House Intelligence Committee when what sounds like an explosion is heard, closely followed by the sound of a plane.[1] The Pentagon is restricted airspace, so this was no ordinary plane, it may have been either the E4B that was seen over the White House or whatever hit the Pentagon.

Pilots for 9/11 Truth obtained data from the NTSB via the Freedom of Information Act that is allegedly derived from Flight 77′s Flight Data Recorder. Initial analysis of that data by Pilots for 9/11 Truth determined that the altitude of the plane would have been at too high to have struck the light poles, the tree, generator trailer or the Pentagon. David Chandler suggests that this may indicate poor data recording equipment rather than fraud.[9]

Many experienced professional pilots[citation needed] have expressed doubt that they could have manage the feasibility of the maneuver that Hanjour is alleged to have carried out. Moreover, he was known as a "terrible" pilot, and his flight instructor said he could not even handle a single-engine Cessna 172. David Chandler suggests that the maneuver although very challenging for any pilot, may have been accomplished using a computer driven "fly by wire" method.[9] 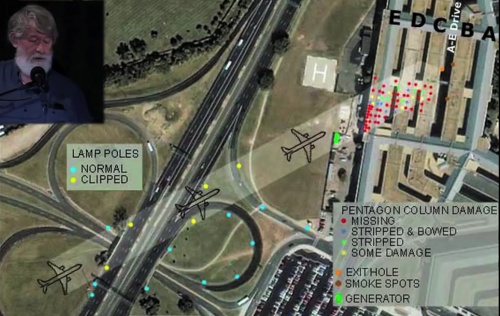 Impact damage summary picture from a presentation by David Chandler.

The pattern of damage involved the rings of the Pentagon, but also to structures directly in front of it, including light poles, a tree and a generator trailer.

Although the eyewitnesses mostly can confirm at least a plane hitting the Pentagon, certain witnesses have kept seeding discourse among various researchers, one being cab driver Lloyde England, a cab driver in his 60s, who changed his story numerous times when being - intensively - questioned.

His wife (who he revealed was an FBI-employee, 2 years later saying she was just a janitor there) admitted the FBI told her he was deceased as someone supposedly took him away on site when according to his own story he walked home, his confusing story over his actual position when his cab got damaged by a knocked-down light-pole and his incomprehensible story when being recorded off-camera that the the silent guy that helped him remove the light pole, disappeared although they rode to the Pentagon together. among with some other weirdly statements has made him a vocal point of discussion between the various theories about the plane, especially with certain later movements in the 2010s promoting a missile theory like the investigators of England.[11] [12] 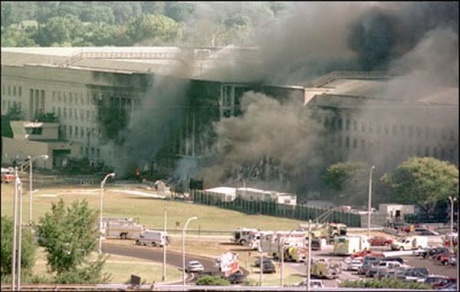 Before the 10:10 roof collapse, the E-wing appears to have little damage, less than one might expect from a direct hit by a 757.

Rarely shown by the corporate media is a photo to the right of the damaged but uncollapsed pentagon. The windows on the left side are still in shape where the plane's vertical stabilizer might have hit. Many within the 9/11 Truth Movement have on occasions suggested that the Pentagon may not in fact have been struck by a plane, including Kevin Barrett, David Ray Griffin, James Fetzer, Daniele Ganser, Niels Harrit, Andreas von Bulow, Christopher Bollyn and Michel Chossudovsky.[8]

“One of my experiences in the Army was being in charge of the Army’s Imagery Interpretation for Scientific and Technical Intelligence during the Cold War. I measured pieces of Soviet equipment from photographs. It was my job. I look at the hole in the Pentagon and I look at the size of an airplane that was supposed to have hit the Pentagon. And I said, ‘The plane does not fit in that hole’. So what did hit the Pentagon? What hit it? Where is it? What’s going on?”- Major General Albert Stubblebine

Some witnesses and experts[Who?] note that the damage appears to be more consistent with a cruise missile rather than a 757.[13] [7] Dr. Janette Sherman used a Geiger counter to measure radiation levels from about 12 miles downwind of the Pentagon shortly after the attack on 9/11. Sherman reported that the Geiger counter reading was 8-10 times greater than normal, indicating that a "depleted uranium warhead may have been used".[citation needed] Dimitri Khalezov a former soviet intelligence officer and whistleblower responsible for nuclear intelligence claims that a stolen soviet P-700 “Granit” missile equipped with a standard “Navy-type” 500 kiloton thermo-nuclear warhead was responsible for damage to the pentagon. [14] 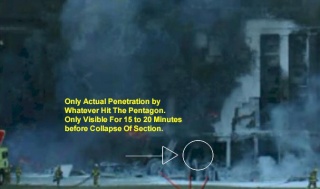 Did a 757 really hit this building?

“From my close-up inspection, there is no evidence of a plane having crashed anywhere near the Pentagon... The only pieces left that you can see are small enough that you could pick up in your hand. There are no large tail sections, wing sections, a fuselage, nothing like that anywhere around which would indicate that the entire plane crashed into the side of the Pentagon and then caused the side to collapse. Even though if you look at the pictures of the Pentagon you see that the floors have all collapsed, that didn’t happen immediately, it wasn’t until almost about forty-five minutes later that the structure was weakened enough that all of the floors collapsed.” - Jamie Mcintyre, CNN

In an interview with Parade Magazine in October 2001, Secretary of Defense Donald Rumsfeld was asked “How did a war targeting civilians arrive on our homeland with seemingly no warning?” Rumsfeld replied:

“There were lots of warnings… It is a truth that a terrorist can attack any time, any place, using any technique and it’s physically impossible to defend at every time and every place against every conceivable technique. Here we’re talking about plastic knives and using an American Airlines flight filled with our citizens, and the missile to damage this building and similar (inaudible) that damaged the World Trade Center. The only way to deal with this problem is by taking the battle to the terrorists, wherever they are, and dealing with them.”

In an interview in September 2006 with CNN’s Miles O’Brien, former 9/11 Commissioner member, Timothy Roemer, says that a missile caused the damage to the Pentagon and then quickly corrects himself to line up with the official story:

"Roemer: “There was — there were many times, Miles, that you were afraid. You were — you were worried, especially when I was standing in front of the Pentagon that night, seeing one of our fortresses pried open by a missile, an airplane, thinking about the number of people that probably died on the plane and on the ground...”

The Pentagon has multiple systems for destruction of incoming fire, none of which appear to have been activated on that morning. This may be related to the following testimony of Norman Mineta about Cheney's order concerning the incoming plane:

E. P. Heidner writes that "the Office of Naval Intelligence in the Pentagon, which sustained a direct hit that day, was without a doubt, a target that was pinpointed for destruction"[16]. Secretary of Defense Donald Rumsfeld had announced $2.3 trillion dollars missing on the day prior to 9/11. The budget analysis office at the pentagon which is responsible for investigation was hit on 9-11.

The building was undergoing reinforcement at the time of the attack. User:Polaris97 writes:

A few days prior to the "9/11" event, the History Channel presented a show in which the Pentagon was a main focus. During the hour-long program, mild-tempered issues were raised related to the quickly deteriorating conditions plaguing the buildings’ structure—outmoded materials used in the initial construction now demanding renovations. However, the fear of astronomical costs for these renovations was put forth as a questionable deterrent for the American public: considering the age of the building (1941-2001), would the facility be relegated to sit as some type of museum and relic of a war-time era gone by, or would it receive the necessary attention to reclaim its glory and dominance over the global stage of military force and strategy? At the end of the program, while the credits were displayed, a narrator was making statements and asking questions about the uncertain fate of this American icon; among the rhetorical questions asked, the option of bomb-proof reinforcement was posited, considering the martial status the Pentagon represents. Too many years after the event, I tried to acquire a screen-shot of the listing of programs scheduled on that day (most likely the 6th, a Thursday, but certainly before the weekend). However, the History Channel web site would not allow gleaning of the shows for that date. If anyone reading has further or more in-depth insights into this particular confluence, please share! In all of my years of “9/11” research, I have not heard a single statement from a television viewer or researcher in reference to this perspective, but it is certain that such persons are indeed out there. I mention this issue because as the spectacle unfolded, my immediate thoughts were continually revisiting the (now considerably strange) show I had watched recently. I do not know if this is a relevant piece of the puzzle, but it served as the catalytic issue for my continued interest in what happened that day.