Aaron Swartz, according to John Naughton was an "internet activist who paid the ultimate price for his combination of genius and conscience".[1]

At the age of 14, having dropped out of school, Swartz helped create the RSS news syndication specification. Aged 19, he co-programmed Reddit, which was sold to Condé Nast in 2006. In 2008, he co-wrote the Guerilla Open Access Manifesto, which called for activists to "liberate" information locked up by corporations or publishers. In 2010, at the age of 23, he co-founded Demand Progress, an online advocacy group that successfully campaigned against internet censorship bills and attracted more than a million members. He was also developer of SecureDrop, an encrypted submission system suitable for whistleblower information operated over the Tor network. By 24, Swartz was a Harvard research fellow conducting studies on political corruption."[2]

In 2013 he "was facing potential jail time for hacking into MIT's computer network and stealing copies of 4.8 million academic papers."[3] Sentences between 35 years or a few months in exchange for a plea agreement were discussed.[4] His attorney then, Elliot Peters, said that two days before his death they were again trying to discuss a way "to resolve the case that didn't destroy Aaron's life", but they rejected six months in exchange for pleading guilty to 13 counts, since he believed "they would win the case at trial".[5]

On the evening of January 11, 2013, Swartz was found dead in his Brooklyn apartment by Taren Stinebrickner-Kauffman, his partner.[6][7] A spokeswoman for New York's Medical Examiner reported that he had hanged himself.[6][7][8] No suicide note was found.[9] Swartz's family and his partner created a memorial website on which they issued a statement, saying: "He used his prodigious skills as a programmer and technologist not to enrich himself but to make the Internet and the world a fairer, better place." John Naughton states that Swartz "was hounded to suicide at the age of 26 by a vindictive US administration", but does not question whether his death in fact was a suicide.[1] His first defense lawyer, in an interview with The Boston Globe, said that he told Stephen Heymann (attorney for the prosecution), that "the kid was a suicide risk".[10] Overall in published articles the sentiment not to question the suicide does prevail, one commentator was levelling threats against Carmen Ortiz, who was United States Attorney at that time, for her alleged inolvement with Oliver North and the Iran contra affair, in exchange for her bad handling of the Swartz case.[11]

At one point, her husband Tom Dolan, suggested on Twitter that Swartz was offered a 6 month sentence as part of a plea deal, later deleting his account.[12][13]

Yoichi Shimatsu has suggested that Swartz was killed because he had uncovered Epstein's VIPaedophile operation.[14] 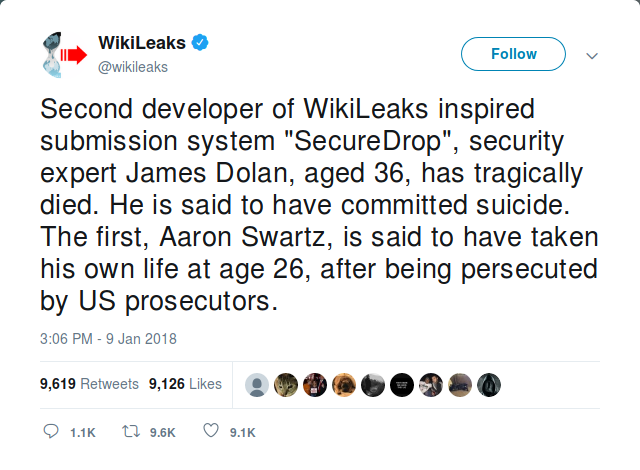 James Dolan, a second programmer of initially three, who designed and developed a submission system for press agencies and newspapers which was inspired by Wikileaks, committed "suicide" five years after the death of Aaron Swartz.[15] A tweet by Wikileaks from early 2018 and the language which is used in it suggests, that the theories of suicide are not fully believed by everybody.