Abu Zubaydah, a Saudi citizen, was captured in a joint Pakistani-CIA-FBI operation in Lahore, Pakistan, in March 2002. He was severly injured by gunshot wounds and the CIA flew a top surgeon from Johns Hopkins in Baltimore to help him survive. He was then taken to Guantanamo and subjected to torture, including having his left eye removed.[1] He is still held incommunicado, still without access to legal proceedings.[2]

The BBC reports that "during the 1990s he was al-Qaeda's chief recruiter."[3]

Daniel Coleman, a 31-year veteran FBI agent intimately familiar with Abu Zubaida’s case, has stated “Looking at other evidence, including a serious head injury that Abu Zubaida had suffered years earlier, Coleman and others at the FBI believed that he had severe mental problems that called his credibility into question. ‘They all knew he was crazy, and they knew he was always on the damn phone,’ Coleman said, referring to al-Qaeda operatives. ‘You think they’re going to tell him anything?’… Much of the threat information provided by Abu Zubaida, Coleman said, ‘was crap.’”[4] 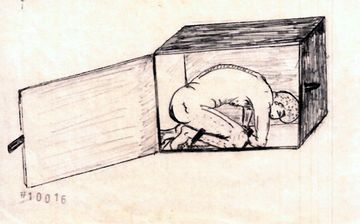 Zubaydah has been subjected to extensive torture by the CIA, including being waterboarded 83 times in a single month.[6] Gina Haspel personally signed "cables to CIA headquarters that detailed Zubayda’s interrogation."[7]

Interrogators stated that if Zubaydah were to die of his torture, his body must be cremated, but if he survived the ordeal, they sought and were given assurances that he would "remain in isolation and incommunicado for the remainder of his life." Zubaydah, "will never be placed in a situation where he has any significant contact with others and/or has the opportunity to be released," the head of the CIA’s ALEC Station[8] replied. The cable reportedly said that "All major players are in concurrence... [that he] should remain incommunicado for the remainder of his life." The decision to hold him "incommunicado" was disclosed by the Senate report on torture, released in December 2014, but the commercially-controlled media has not explored the implications.[2]

The US Supreme Court declared in 2008 that prisoners held in Guantanamo did have recourse to US law.

Failure of US law

Zubaydah has lodged over a dozen legal pleas since 2008, all of which as of May 2015 were in limbo, pending action by judge Richard W. Roberts.[2] By September 2015, his defense lawyers had produced 116 pages of notes in 10 different submissions, each detailing his torture in Guantanamo Bay. All of this material was declared classified by the US government.[6] Judge Roberts however failed to rule on any motions related to the case, even the preliminary ones. This led Zubaydah's lawyers to file motion asking Roberts to recuse himself for "nonfeasance" in January 2015.

Poland cooperated with US allowing the CIA to hold and torture Zubaydah on its territory in 2002–2003. As a result of this, on July 24, 2014 the European Court of Human Rights ordered the Polish government to pay Zubaydah €100,000 in damages. It also awarded him €30,000 to cover his costs. Zubaydah said through his US lawyer that he would be donating the full €100,000 in damages to victims of torture.[9]