From Wikispooks
(Redirected from Afghan)
Jump to navigation Jump to search

Afghanistan is a nation state in Central Asia. It was invaded in 2001, after the Taliban outlawed the growing of opium (nominally as a response to the events of 9-11). Following occupation by NATO troops, opium production has surged, meaning Afghanistan is now the source of around 90% of the world's heroin.

The US government's official narrative states that Al Qaeda was responsible for conceiving and carry out the 9/11 attacks, under the leadership of Ossama Bin Laden from a hideout somewhere in Afghanistan. This justifies their invasion and subsequent occupation, an operation which was planned months before September 11th.

The US led attack on Afghanistan was planned before the September 11th event[1], so clearly has some ulterior motive(s), of which the most obvious would seem to be the potential for profits from the opium trade and of course the perpetual need of the MICC for war and unrest.

Afghanistan was invaded by the USSR in December 1979, and the 1980s Afghan war ensued until a Soviet withdrawal in 1989. This lead the US to arms and train Muslim groups, which later became the "Muslim terrorists" used by Operation Gladio/B.

Adam Curtis' Bitter Lake tells how the geography of Afghanistan was changed after WWII by international development agencies which built damns that raised the water table. This facilitated opium cultivation.

The opium poppy harvest in Afghanistan for the year 2000 was outstandingly low, after the Taliban banned production of the crop. However, it increased after the US led an invaded the country in 2001 and Afghanistan now produces the vast majority of the world's opium, and has been enjoying record harvests, leading to it being labelled a "narco-state". Sibel Edmonds has stated that a large proportion of this is shipped via US military planes to Turkey for onwards distribution.[2] 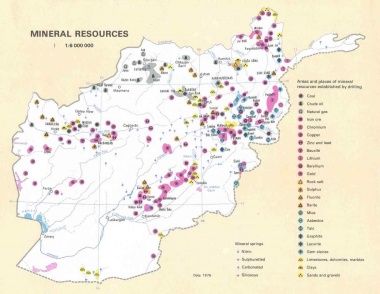 Afghanistan has huge mineral deposits of a wide variety. The New York Times, to the incredulity of Russ Baker[3] claimed that "the vast scale of Afghanistan’s mineral wealth was [recently] discovered by a small team of Pentagon officials and American geologists." Baker instead suggests that "other evidence, and logic, point to the fact that everyone but the Western public knew for a long time, and before the 2001 invasion, that Afghanistan was a treasure trove."

Wikileaks stated in 2014 that "the National Security Agency has been recording and storing nearly all the domestic (and international) phone calls from two or more target countries as of 2013... WikiLeaks has confirmed that the identity of victim state is Afghanistan."[4]

On 14th April 2021, NATO Secretary General Jens Stoltenberg announced the start of withdrawing troops from Afghanistan by May 1st.[5] The withdrawal appears to be uncoordinated at times,[6] and while the Afghan Army tries to fight the takeover,[7][8] there are reported instances where equipment, vehicles and bases are captured with little resistance.[9][10][11] A delegation of the Taliban visiting China in late July 2021 was told that China expects the Taliban to play important role in ending Afghanistan's war and rebuilding the country.[12]

Citizens of Afghanistan on Wikispooks