Airey Neave was friend and key advisor to Margaret Thatcher who "had learned all there is to learn about intrigue, deception and the political Black Arts"[1][2]

Neave was assassinated on 30 March 1979 - allegedly by an Irish group - in a car bomb attack at the House of Commons. Although he appeared a figure of small consequence, he was in fact a deep state operative, a "ghost in the establishment, faceless and featureless, quietly and decisively fixing the course of events",[3] "in a shadowy world that shifted constantly between the glare of public life and the furtive secrecy of the British intelligence services."[3]

"During World War II, he "worked for MI9, a subsidiary of MI6, later holding the rank of commanding officer of the Intelligence School 9, Territorial Army (TA)."[4]

After the war, newly-qualified as a barrister[4] , Neave was assigned to the British War Crimes Team at Nuremberg, where he served the indictments on Goering and the other major Nazi war criminals. Thereafter Neave became Conservative Party MP for Abington in 1953.

Officially, he remained in intelligence until 1951. Unofficially, he never left, continuing to be involved in MI6, as was his wife Diana through her links with the émigré Polish community.

In the 1950s, he had an unremarkable career as a junior minister in the colonial and aviation ministries before falling from favour. He had stood down from his job because of illness, but when he returned in good health and asked for a new job, the then chief whip, Edward Heath, told the right-winger: "You're finished." For 16 years, Neave nursed his bitterness; and when, in 1975, a challenge was raised to Heath as leader of the Conservative Party, Neave became campaign manager for the rightist contender, Margaret Thatcher.[3] When she became Leader of the Opposition, she offered him the chance to shadow any Cabinet post he wanted – and take on the same job when the Tories came to power. He chose to forgo the great offices of state and asked for Northern Ireland. This meant that, in an era when Ireland was replacing the Cold War as the chief preoccupation of military intelligence, the security services had one of their men in a pivotal role at a crucial moment in the history of the province.[3]

Quite what Neave's role in the secret service was in the years that followed has never become clear. Critics of British policy in Ulster maintained that British intelligence became involved in treasonable policies. In 1987, the Labour MP Ken Livingstone used the cover of parliamentary privilege to suggest in the House of Commons that Airey Neave was a co-conspirator with MI5 and MI6 in disinformation activities involving the whistle-blowing spies Colin Wallace and Peter Wright. He also alleged that, a week before his murder, Neave sought to recruit a former MI6 officer to set up a small group to involve itself in the internal struggles of the Labour Party.[3]

Neave had decade earlier planned to set up an "army of resistance" (presumably GB75) to the Labour government of the Wilson era to "forestall a Communist take-over" and talked of assassinating Tony Benn should he become prime minister.[3] 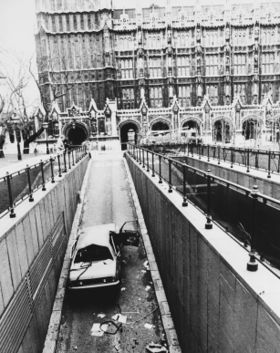 On 30th March 1979 Neave was injured in Whitehall by a car bomb. "He was quickly taken to Westminster Hospital where he underwent emergency surgery. But it was too late and he died on the operating table."[4][5]

The Provisional Irish Republican Army reportedly claimed responsibility for the bombing,[4] though it was later attributed to the INLA. Others have suggested that it was an attack by the UK deep state who were concerned about by his plans to restructure MI5 and MI6. He is reputed to have remarked that "There has been serious corruption" and that "there is going to be cleaning of the stables".[citation needed]

The commercially-controlled media condemned a drama Utopia which suggested that he was not killed by the INLA as the official narrative states.[6]