Aivar Rehe was a financier in charge of the Estonian branch of the Danske Bank while large scale money laundering was going on. He died suddenly in September 2019.

Aivar Rehe graduated in 1985 from the Faculty of Economics of Tallinn University of Technology.

Aivar Rehe worked for a sequence of Estonian banks, and was later the chairman of the Estonian branch of Danske Bank.

He was also chairman of the board of Estonian Banking Association.[1]

Rehe led the Estonian branch of Danske Bank during the time when a large-scale money laundering 2012 was held in the bank.[2]

In the morning of 23 September 2019 Rehe disappeared. Police searches began on the same day, involving 40 people, dogs and drones.[3] On 25 September, the Estonian police and Border Guard Board confirmed that they had found his body.[4] The Independent termed it "an apparent suicide".[5] "“The body has no signs of violence, neither does anything point to an accident,” police said, declining to provide further details out of courtesy to Mr Rehe’s family. There will be no investigation into his death, they added."[5] 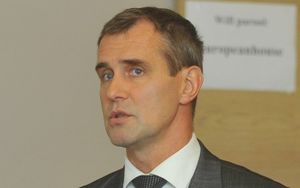 +
Has image2
File:Aivar Rehe.jpg +
Has nationality
Estonian +
Has noRatings
0 +
Has objectClass
Person +
Has objectClass2
Person +
Has posting
Chairman +  and Director general +
Has revisionSize
2,436 +
Has revisionUser
Robin +
Has wikipediaPage
https://et.wikipedia.org/wiki/Aivar Rehe +
Has wikipediaPage2
https://et.wikipedia.org/wiki/Aivar_Rehe +
Is not stub
true +
Victim of
Premature death +
Has subobject"Has subobject" is a predefined property representing a container construct and is provided by Semantic MediaWiki.
Aivar Rehe +, Aivar Rehe +  and Aivar Rehe +