His godparents were King George VI and Queen Elizabeth II. Current pretender to the abolished thrones of Yugoslavia and Serbia. By marrying a Roman Catholic, Alexander lost his place in line of succession to the British Throne, which he had held as a descendant of Queen Victoria. The couple divorced in 1985. Crown Prince Alexander married Katherine Clairy Batis, the daughter of Robert Batis and his wife, Anna Dosti, legally on September 20, 1985, and religiously the following day, at St. Sava Serbian Orthodox Church, Notting Hill, London. Alexander first came to Yugoslavia in 1991. He moved to Yugoslavia after Slobodan Milošević was deposed in 2000. In March 2001 Yugoslavian citizenship was given to him by the government and property seized from his family, including royal palaces, were returned. Alexander is a proponent of establishing parliamentary monarchy in Serbia within its current borders and sees himself as the rightful king. 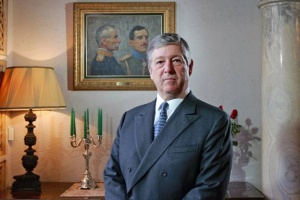 +
Has image2
File:Alexander Karageorgevitch.jpg +
Has nationality
UK? +  and Serbian? +
Has noRatings
0 +
Has objectClass
Person +
Has objectClass2
Person +
Has religion
Serbian Orthodox +
Has revisionSize
1,704 +
Has revisionUser
Robin +
Has spouse
Princess Maria da Gloria of Orléans Bragança +
Has wikipediaPage
https://en.wikipedia.org/wiki/Alexander, Crown Prince of Yugoslavia +
Has wikipediaPage2
https://en.wikipedia.org/wiki/Alexander,_Crown_Prince_of_Yugoslavia +
Is stub
true +