She also represented Julian Assange, the founder of WikiLeaks, in his fight against extradition;[7]

In 2019 she was appointed as the special envoy on media freedom by the British Foreign and Commonwealth Office.[8] She resigned from this role in 2020.[9]

She is married to film actor and director George Clooney, who himself has done work as a frontman for US intelligence services and humanitarian wars, most notably in Sudan.

Amal Alamuddin Clooney was born in Beirut, Lebanon. Her family left Lebanon when she was two years old, during the Lebanese Civil War, and settled in Gerrards Cross, Buckinghamshire.[10] Her father Ramzi Alamuddin, a Lebanese Druze from the Alam al-Din dynasty village of Baakline in the Chouf District,[11] received his MBA degree at the American University of Beirut. He returned to Lebanon in 1991[12][13] after the end of the Lebanese Civil War. Her mother, Bariaa (née Miknass), is from a family of Sunni Muslims from Tripoli in Northern Lebanon,[14][11] and is a political journalist and foreign editor of the Pan-Arab newspaper al-Hayat.[15] She is also a founder of the public relations company International Communication Experts, which is part of a larger company that specialises in celebrity guest bookings, publicity photography, and event promotion.[16]

She then studied at St Hugh's College, Oxford, where she received an exhibition grant and the Shrigley Award.[17][18] She graduated with a Bachelor of Arts (BA) degree in Jurisprudence in 2000. The following year she entered New York University School of Law to study for the Master of Laws (LL.M) degree. She received the Jack J. Katz Memorial Award for excellence in entertainment law.[19][20] While at NYU she worked for one semester in the office of Sonia Sotomayor, then a judge for the United States Court of Appeals for the Second Circuit.[21]

Clooney worked at Sullivan & Cromwell in New York City for three years as part of the Criminal Defense and Investigations Group, where her clients included Enron and Arthur Andersen.[18][19]

She completed a judicial clerkship at the International Court of Justice in 2004, serving under Judge Vladlen S. Vereshchetin from Russia, Judge Nabil Elaraby from Egypt,[22][23] and ad hoc Judge Sir Franklin Berman from the United Kingdom.

She was subsequently based in The Hague working in the Office of the Prosecutor at the UN Special Tribunal for Lebanon and at the International Criminal Tribunal for the former Yugoslavia.[24] 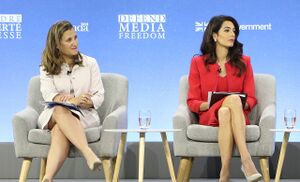 Clooney (right) with Canadian Foreign Minister Chrystia Freeland at the Global Conference for Media Freedom in London in 2019.

Clooney returned to Britain in 2010,[25] where she became a barrister in London (Bar of England & Wales, Inner Temple) at Doughty Street Chambers.[18] In 2013 she was appointed to a number of United Nations commissions, including as adviser to Special Envoy Kofi Annan on Syria and as Counsel to the 2013 Drone Inquiry by UN human rights rapporteur Ben Emmerson QC into the use of drones in counter-terrorism operations.[20][26]

Clooney had been involved in high-profile cases representing the state of Cambodia, the former Libyan intelligence chief Abdallah Al Senussi, Yulia Tymoshenko,[27] Julian Assange, and was an adviser to the King of Bahrain in connection with the Bahrain Independent Commission of Inquiry headed by Professor M. Cherif Bassiouni.[19]

Clooney taught at Columbia Law School for the spring 2018 semester, again as a co-professor with Sarah H. Cleveland giving a core class on human rights.[32] Clooney has also lectured students on international criminal law at the SOAS Law School in London, The New School in New York City, The Hague Academy of International Law, and the University of North Carolina at Chapel Hill.[19]

In 2011 Clooney assisted the Permanent Court of Arbitration in the arbitration between Merck Sharp and Dohme, and the Republic of Ecuador.[33]

Clooney represented Canadian Al Jazeera journalist Mohamed Fahmy in 2004 who was being held in Egypt, along with other journalists.[34][35][36][37] He was eventually sentenced to three years in prison, and lost a retrial in August 2015 before finally being pardoned by Egyptian president Abdel Fattah al-Sisi.[38][39]

In August 2014 she declined a UN commission to look into possible violations of the rules of war in Gaza during the Gaza war of 2014.[40] In October 2014 she was hired in an attempt to repatriate the ancient Greek sculptures known as the Elgin Marbles.[41][42] In May 2015, Greece decided to stop legal proceedings to recover the sculptures and dismissed her as their brief.[43]

Clooney began work on the recognition of the Armenian genocide in January 2015.[44] She represented Armenia on behalf of Doughty Street Chambers along with Geoffrey Robertson QC.[45] She said Turkey's stance was hypocritical "because of its disgraceful record on freedom of expression", including prosecutions of Turkish-Armenians who campaigned for the 1915 massacres to be called a genocide.[44] She has represented Armenia in the case against Doğu Perinçek,[46][47] whose 2007 conviction for genocide denial and racial discrimination was overturned in Perinçek v. Switzerland (2013).[44] A "minor internet frenzy" resulted from her bon mot prior to the 28 January 2015 hearing. In response to a journalist pestering her over what designer gown she would be wearing in court, she replied "Ede & Ravenscroft" the tailors who make her court robes.[48][49]

On 8 March 2015, Clooney filed a case against the Government of the Republic of the Philippines before the UN's Working Group on Arbitrary Detention, a body under the United Nations Commission on Human Rights, for the continued detention of former Philippine president Gloria Macapagal Arroyo.[50] Arroyo was a sitting Pampanga congresswoman at the time. On 2 October, The United Nations Working Group on Arbitrary Detention later released its opinion that the detention of former President Arroyo "violates international law" and is "arbitrary on a number of grounds".[51]

On 7 April 2015, it was announced that she would be part of the legal team defending Mohamed Nasheed, former President of the Maldives, in his ongoing arbitrary detention.[52] Nasheed was sentenced to 13 years in jail in March 2015 following what was characterized as a politically motivated trial.[53] Amnesty International described his sentencing as a "travesty of justice".[54][55] Prior to visiting the Maldives, the local co-counsel working on the case was stabbed in the head, an indication of the danger and instability in the country.[56] In January 2016, she gave a series of interviews about the UN-condemned trial and imprisonment of Nasheed and put forth efforts to support imposing sanctions on the Maldives.[57][58] According to The Economist, she has "helped strengthen the backing of Britain's prime minister, David Cameron, for the cause of Maldivian democracy."[59]

In June 2015, Clooney began work on the recently re-opened Hooded Men case[60] brought by the Irish government against the British government in the European Court of Human Rights.[61][62] She worked with Irish Minister for Foreign Affairs Charles Flanagan on the case, which concerned policies used by UK Prime Minister Edward Heath (1970–1974) in Operation Demetrius that included the illegal interrogation methods known as five techniques.[63] In September 2018, the court rejected the final appeal in the case.[64]

Clooney is part of the legal team representing Louis Olivier Bancoult and Chagos islanders on their claim[65] that they had been forced off their island, Diego Garcia, in 1971 by the UK government to make way for a U.S. military base.[66]

In 2016, it was announced that Clooney would represent Azerbaijani journalist Khadija Ismayilova at the European Court of Human Rights. Ismayilova's investigative work had resulted in her imprisonment.[67] Following the trial, Ismayilova was released from prison and had her sentence reduced to a suspended three-and-a-half-year term.[68]

In September 2016, Clooney spoke for the first time at the United Nations before the United Nations Office on Drugs and Crime (UNODC) to discuss the decision she made in June 2016[69] to represent Nadia Murad as a client in legal action against ISIL commanders.[70][71][72] Clooney characterised the genocide, rape, and trafficking as a "bureaucracy of evil on an industrial scale" by ISIL, describing a slave market existing both online, on Facebook and in the Middle East that is still active today.[73]

Clooney, along with Ara Darzi, was involved in securing the release of two Reuters journalists, Wa Lone and Kyaw Soe Oo, from Myanmar on 7 May 2019.[74]

In February 2020, she began to represent the Maldives in pursuing justice for Rohingya people at the UN International Court of Justice.[75][76]

In May 2014, Clooney was a signatory of UNICEF UK and Jemima Khan's open letter that called for "action from UK Government to protect women and children".[79]

On 2 January 2015, it was reported by The Guardian that before Clooney was involved as Rapporteur in the case against Mohamed Fahmy, she had written a report in February 2014 for the International Bar Association's Human Rights Institute (IBAHRI) that was critical of Egypt's judiciary process. Alamuddin and others were warned that there was a strong possibility they would be arrested if they entered Egypt, as a result of the criticism.[80][81]

In April 2019, she became a special envoy at the British Foreign and Commonwealth Office, advising the Secretary of State, Jeremy Hunt on global media freedom.[8][82] In July 2019, she was appointed Deputy Chair of the High Level Panel of Legal Experts on Media Freedom, convened by Lord Neuberger at the request of the UK and Canadian governments.[83] The Panel is independent of government and formed of a group of leading international lawyers and has been constituted to 'develop and promote legal mechanisms to prevent and reverse media abuses'.[84] In September 2020, Clooney resigned as Special Envoy over the UK government's intention to break international law over Brexit.[9] She remains Vice Chair of the High Level Panel.[85]

Clooney was chosen as Barbara Walters' Most Fascinating Person of 2014.[86]

The Simon Wiesenthal Center honored Amal and George Clooney with its Humanitarian Award at its 2020 virtual gala.

On November 19, 2020, she was awarded by the Committee to Protect Journalists the Gwen Ifill Press Freedom Award which is presented annually to an individual who has shown extraordinary and sustained achievement in the cause of press freedom.[88] Previous recipients included Judy Woodruff in 2017, Maria Ressa in 2018 and Zaffar Abbas in 2019.

Clooney is the president of the Clooney Foundation for Justice, which she co-founded with her husband George Clooney in late 2016 to advance justice in courtrooms, communities, and classrooms around the world.

She partnered with the Aurora Humanitarian Initiative in beginning the Amal Clooney Scholarship, which was created to send one female student from Lebanon to the United World College Dilijan each year, to enroll in a two-year International Baccalaureate (IB) programme.[89]

Clooney and her husband sponsored a Yazidi student, Hazim Avdal, whom she met via her work with Nadia Murad as Avdal worked at Yazda. Avdal was attending the University of Chicago.[90]

In 2018, following the Stoneman Douglas High School shooting, the Clooneys pledged $500,000 to the March for Our Lives and said they would be in attendance.[91]

Clooney is fluent in English, French, and has some knowledge of Arabic.[92][93]

This page imported content from Wikipedia on 22.09.2021.
Wikipedia is not affiliated with Wikispooks.   Original page source here
Retrieved from "https://wikispooks.com/w/index.php?title=Amal_Clooney&oldid=227349"
Categories: