Anas Sarwar (born 14 March 1983) is a Scottish politician who has served as Leader of the Scottish Labour Party since February 2021. Keir Starmer tweeted:

Huge congratulations to @AnasSarwar on his election as Leader of the Scottish Labour Party. I look forward to working with him to secure our economy, protect our NHS and rebuild our country.[1] 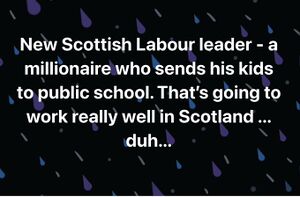