Andrey Leonidovich Kostin is a Russian banker, financier, public and political figure, candidate of economic sciences, president and chairman of the VTB Management board since June 10, 2002. [1]

He was selected a Global Leader for Tomorrow by the World Economic Forum in 1999, and is closely connected to the forum.

1979 — graduates with honors from the Faculty of Economics of Moscow State University with a degree in political economy which qualified him as an economist and teacher of political economy. He was immediately assigned to work abroad at the USSR Ministry of Foreign Affairs.[2]

1982—1985 — Secretary of the European Department of the USSR Ministry of Foreign Affairs.[3]

1990—1992 — First Secretary, Advisor to the European Department of the USSR Ministry of Foreign Affairs 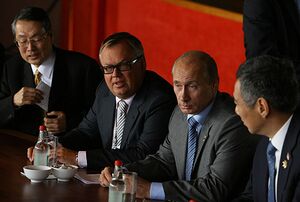 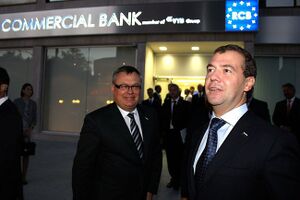 He is one of the most active representatives of the Russian banking sector and is a frequent guest on CNBC,[4] Fox News,[5] CNN,[6] BBC and Bloomberg TV channel. He has three times participated in the Charlie Rose show on Bloomberg television,[7] as well as the Hard Talk programme on BBC.

In 1996, Kostin for the first time took part in the World Economic Forum in Davos, at that time the main platform for communication between Russian entrepreneurship and foreign colleagues. Since then, he has been a permanent participant of the forum in Davos. [8]

In May 2017, Kostin suggested the Washington elite was purposefully disrupting the presidency of Donald Trump by spreading false accusations about his ties to Russia.[9]

In December 2018, the organizers of the Davos Forum "virtually refused" Kostin, Oleg Deripaska and Viktor Vekselberg to participate in the forum due to the imposition of American sanctions against them. The invitation to the three entrepreneurs was renewed only after the intervention of Russian Prime Minister Dmitry Medvedev , who threatened in connection with the scandal not to send an official Russian delegation to Davos.[12]

On January 22-4, 2018, during interviews at the WEF in Davos, Kostin again stated that additional sanctions against individuals or entities would be an "economic war".[13][14]

He is on the supervisory board of Post Bank.[15]

On April 4, 2019, the Vedomosti newspaper drew attention to the massive blocking of publications by Roskomnadzor on the Internet, most of which mentioned gifts from VTB bank president Andrei Kostin to Nailya Askerzade. In the interests of VTB, and by a court decision, Roskomnadzor blocked about 1000 publications.[16]

On December 2, 2019, FBK’s Alexei Navalny released an investigation about Kostin's relationship with Naila Asker-zade on YouTube. In this video Alexei Navalny accused Kostin of making gifts to journalist Nailya Asker-zade[17] (use of a business jet, yacht, house in the cottage village, two apartments, one of them directly from VTB, second from Kirill Zimarin, the head of a subsidiary of VTB in Cyprus) with proof from her Instagram account. Kostin, according to Navalny in his video clip, uses money belonging to the bank, 60.9% of which is state-owned, to buy luxurious real estate for his beloved. According to The Bell said that there is a link between VTB and the business jet, but not with the yacht, and that it is impossible to draw a conclusion about the owners of the plane and yacht, as well as who paid for the journalist's travels. On December 25, 2019, Kostin said that he would think about what actions to take about the investigation, and refused to comment.[18][19]

According to official data, Kostin is married, has children and a grandson.[20]

This page imported content from Wikipedia on 01.01.2022.
Wikipedia is not affiliated with Wikispooks.   Original page source here
Retrieved from "https://wikispooks.com/w/index.php?title=Andrey_Kostin&oldid=236818"
Categories: