Andy Hayman is a retired

In November 1998, Mr Hayman entered the Association of Chief Police Officers (Acpo) when he was appointed to the rank of commander in the Met with responsibility for drugs, crime and complaints investigations.

Between then and December 2002 he was responsible for a range of serious crime issues, as well as corruption in the Met, while representing Acpo on drugs issues.

He left the Met to become Chief Constable of Norfolk, where he stayed until he returned to Scotland Yard to take up the post as Assistant Commissioner (Specialist Operations) in February 2005.

The role encompasses responsibility for terrorist investigations, the protection of royalty, VIPs and diplomats and aviation security.

Mr Hayman, who is married with two daughters, has been a leading voice on terror in Acpo and government circles.

With Mr Clarke, he has been a major influence in the creation of a nationwide anti-terrorist investigation structure - the need for which was illustrated by the fact that the July 7 London bombers came from Leeds. [1]

Hayman was appointed head of the Metropolitan Police Anti-Corruption and Complaints Department in September 1999.[2]

During his tenure, Hayman wrote a confidential letter to Guardian editor Alan Rusbridger about two of the paper's reporters who were investigating police corruption:

In 2000, Gillard and Flynn were working on freelance contracts for The Guardian investigating alleged police corruption. On 2 August, Hayman sent a "strictly confidential" letter to Rusbridger claiming that the actions of the pair could undermine an important case the Met was working on.

Gillard and Flynn were not shown the letter, taken off the police corruption story and subsequently did not have their Guardian contracts renewed.

The Guardian has always maintained that there was no connection between the letter and the dropping of the investigations, which it felt were going nowhere. It also claims that the letter was received while Rusbridger had been holiday and was forgotten about and placed in a file.[3]

The investigation into Ali Dizaei, then a Metropolitan police superintendent, ended with his acquittal at the Old Bailey on corruption charges after a four-year pursuit by his own force. Mr Dizaei's phones were tapped and he was followed by his fellow officers. When he was suspended in January 2001, he was legal adviser to the National Black Police Association (NBPA) and helped officers sue forces for discrimination. Yesterday's apology came after the discovery that the Met had listened in to confidential calls about black and Asian officers suing the force for racism.

In a negotiated settlement between the Met and the NBPA, the police admitted making mistakes and to bugging privileged legal calls and transcribing them.[4]

Hayman was criticised by an official investigation of the police response to the death of Jean Charles De Menezes.

The investigation by the Independent Police Complaints Commission (IPCC), which lasted two years and cost £300,000, found one person culpable over the mishandling of emerging information about Jean Charles de Menezes, 27, who was shot seven times in the head at Stockwell Tube station on 22 July 2005.

It accused Assistant Commissioner Andy Hayman, the head of counter-terrorism operations, of "misleading the public" by trying to hide the fact that the dead man was not a suspect of the 21 July suicide bombing plot. His actions, says the report, "cause us serious concerns".

The report reveals that Mr Hayman had briefed crime reporters on the day of the shooting that the dead man was not one of the 21 July suspects. However, that information was "deliberately withheld" from a press release he helped to write later on. The report states: "Assistant Commissioner Hayman chose to mislead the public by his actions." [5]

Hayman spoke out in favour of 90-day detention ahead of a key Commons vote in 2005, leading to Opposition complaints that the police had been politicised.

Ahead of Wednesday's vote extending the detention time limit from 14 to 90 day, Andy Hayman, head of counter-terrorism at the Metropolitan Police, wrote a memorandum arguing the case for the plan.

He also joined Home Secretary Charles Clarke to meet Labour backbenchers and was interviewed on television and radio.[6]

His stance on the issue was cited at the time by Dean Godson.[7]

Hayman was the most senior officer involved in authorising the bugging of Sadiq Khan MP.

On 21 May 2005 between 9.47 and 10.49 am and on 24 June 2006 between 9.16 and 10.37 am Mr Khan visited Babar Ahmad. The prison records of the visits show him as a friend. Both visits were monitored by surveillance. In relation to 21 May, surveillance was applied for by a Detective Constable on 6th May 2005, (after Babar Ahmad had returned to Woodhill from Belmarsh), recommended to ACPO rank by Detective Superintendent Fuller, agreed to by Deputy Governor Davis and approved by Assistant Commissioner Hayman on 11 May 2005. The authorisation was to monitor and record non-legal visits to Babar Ahmad by 18 named people including Sadiq Khan. Prison policy required that prisoners, not visitors, be targeted Report of for surveillance. That authorisation, subject to monthly review and three monthly renewal, effectively remained in force until December 2006.

It was reviewed on 7 June by Mr Fuller and on 14 June 2005 by Mr Hayman. The record of that review indicates that information had been gained that a recently elected Member of Parliament had offered Babar Ahmad help to fight extradition but there is no indication that the Member of Parliament in question was Mr Khan. In relation to 24 June 2006, the authorisation was reviewed on 7 June 2006 by another Detective Constable, recommended to ACPO rank by Detective Superintendent McKinney, agreed to by Deputy Governor Davis and continued by Mr Hayman on 9 June 2006. The product of the monitoring of both visits was summarised by a TVP officer in written reports for the Security Service (who took no part in the authorisation process or the monitoring). Those reports were filed and the Service took no action on them. [8].

"Andy Hayman, and Eliza Manningham-Buller, the people who front up our services very well, they are absolutely top rate professionals, they should be given support in getting on with the job, and I wouldn't draw any conclusions from Forest Gate at the moment frankly."[9]

Hayman issued an apology for the raid some days later.[10]

Hayman resigned in December 2007 following allegations about contacts with a staff member at the Independent Police Complaints Commission.

Mr Hayman – a 48-year-old married father of two – has been caught up in two internal investigations this year.

The first was sparked after complaints that information about a series of anti-terror raids in Birmingham last February was leaked to the media in advance.

Mr Hayman's telephone records for the months before and after the raids were scrutinised and he was cleared of any blame.

Investigators did, however, find details of the hundreds of 'unexplained' calls between Mr Hayman and the complaints commission official.

She has now left the police watchdog and works for the Association of Chief Police Officers.

In a separate inquiry, Yard auditors raised concerns over the £15,000 spent by Mr Hayman on drinks, restaurants, hotels and foreign travel.

He strenuously denied the expenses allegations and vowed to clear his name when details of the financial probe emerged last month.[11]

Hayman claimed he had been the victim of a dirty tricks campaign:

One senior officer said he was forced out as a "human sacrifice" following a dirty tricks campaign to save "discredited, accident prone" boss Sir Ian Blair's job.

And Metropolitan Police Assistant Commissioner Mr Hayman told the Daily Mirror: "Somebody has been spreading smears about me for political purposes.

"My suspicion is that smear stories are being spread about me which are designed to damage the Met. There has been a lot of baying for blood since Stockwell." [12]

Melanie Phillips had earlier suggested that with the allegations against Hayman, "The campaign against extending the 28-day pre-charge detention limit for terrorism suspects has now entered the territory of black propaganda."[13] 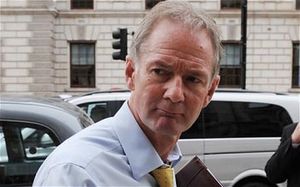 +
Has image2
File:Andy Hayman.jpg +
Has nationality
UK +
Has noRatings
0 +
Has objectClass
Person +
Has objectClass2
Person +
Has posting
Assistant Commissioner for Specialist Operations +  and Chief Constable of Norfolk Constabulary +
Has powerbase
http://powerbase.info/index.php/Andy Hayman +
Has revisionSize
12,420 +
Has revisionUser
Robin +
Has wikipediaPage
https://en.wikipedia.org/wiki/Andy Hayman +
Has wikipediaPage2
https://en.wikipedia.org/wiki/Andy_Hayman +
Is not stub
true +
Source credit
Powerbase +
Has subobject"Has subobject" is a predefined property representing a container construct and is provided by Semantic MediaWiki.
Andy Hayman +  and Andy Hayman +