Angel Fire is a village in Colfax County, New Mexico, United States. The population was 1,216 at the 2010 census. It is a popular ski resort destination. Angel Fire and nearby communities experience cold winter temperatures and mild temperatures in the summer. 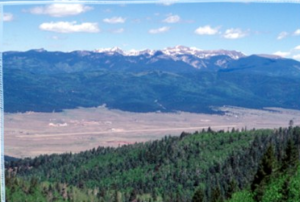 Angel Fire is served by the Angel Fire Airport (AXX). Its runways have paved lengths of 8,900 by 100 feet (2,713 by 30 m) and are jet capable. The airport is managed and maintained by Ross Aviation/Pearce Enterprises and can accommodate corporate and private aircraft. By elevation, Angel Fire Airport is the fifth highest in the United States.[1] The airport briefly saw scheduled airline service during the winter of 1986/1987 by Mesa Airlines with a single flight to Albuquerque using a 19-seat Beechcraft 1900 aircraft.[2] It is included in the US National Plan of Integrated Airport Systems for 2011–2015, which falls under the US FAA category of "general aviation facility".[3] For the 12-month period ending April 30, 2010, the airport had 30 aircraft operations, an average of 2 per month: 67% general aviation and 33% military.[4]

In a letter to the DEA, James A. Leach (R-Iowa) asked the agency to provide all documents relating to “possible ties between activities at Mena Airport and the use of a private airstrip at a similarly remote location near Taos, New Mexico, at a ski resort called Angel Fire” — a resort owned by Dan Lasater. Leach wrote: “Published reports indicate that DEA conducted at least two separate investigations of alleged money laundering and drug trafficking in or around Angel Fire, the first in approximately 1984, and the second in 1988-1989.” He said the second investigation was triggered by allegations from former Angel Fire employees “that the resort was the focal point for ‘a large controlled substance smuggling operation and large-scale money laundering activity.’[5]

Leach added: “The alleged activity at Angel Fire was roughly contemporaneous with the money laundering and narcotics trafficking alleged to have taken place in or around Mena Airport during the period 1982-1986.”

Angel Fire Resort was bought by Lasater for $19 million in 1984.[6] When Lasater, a friend of Bill Clinton, was mentioned in the Whitewater affair, it led to an inquiry into Angel Fire's finances by investigators working for special counsel Robert B. Fiske and both the House banking committee and the Senate banking committee.[7]

In 1994 Angel Fire Resort filed for bankruptcy[8] and by 1995 a plan was being assembled to sell it to a group of Texan businessmen for $12 million.[9]