Angela Merkel is a German politician and deep state operative, serving as Chancellor of Germany since 2005. She is leaving office at the 2021 German parliamentary election, in which she will not seek re-election.

Angela Merkel was born in Hamburg, West Germany, in 1954). Shortly after her birth, her family made the unusual choice of moving to the East. Her father Horst Kasner, a pastor in the Lutheran church, then founded a seminary in East Germany and became director of a home for handicapped persons. He was regarded as a religious leader and idealist who did not oppose the church governance or the policies of the Socialist party.

At school Merkel learned to speak Russian fluently, and was awarded prizes for her proficiency in Russian and mathematics. Merkel continued her education at Karl Marx University, Leipzig, where she studied physics from 1973 to 1978[1]. She married a physician, Ulrich Merkel, whom she soon divorced. She then moved in with Professor Joachim Sauer, divorced like herself but already the father of two children. Angela Merkel obtained a research post in quantum physics at the Academy of Sciences.

At the same time, she became politically involved in the Freie Deutsche Jugend (Free German Youth), the state organisation for young people. She rose within the organisation to the post of Secretary of the Agitprop department, becoming one of the main experts in political communication in the communist dictatorship. For professional and political reasons, she often travelled within the Soviet bloc, above all to Moscow, particularly since she spoke Russian fluently.[2]

The fall of the Berlin Wall in November 1989 served as the catalyst for Merkel's political career. Although she did not participate in the crowd celebrations the night the wall came down, one month later Merkel became involved in the growing democracy movement, joining the new party Democratic Awakenin, which later merged with the West German Christian Democratic Union.

Selected by the deep state 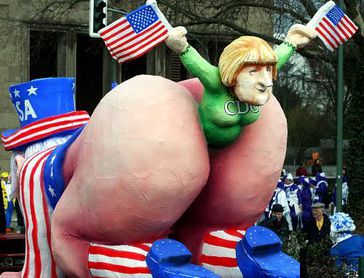 There are several strange things around her early career after the dissolution of East Germany that indicates she was handpicked and promoted by deep state forces.

An unknown Angela Merkel was picked to be in first class of Young Global Leaders in 1992, together with Tony Blair and others. This is remarkable, considering the Berlin Wall came down in 1989 and German reunification happened in 1991, and she had a rocket career afterwards.

Helmut Kohl always spoke of Angela Merkel as" my girl "in the early 1990s. Although strict in matters of morals, he selected this young childless divorcee from the East living with a partner as Minister for Family, Youth and Women.

Merkel was elected CDU General Secretary, before becoming the party's first female leader and the first female Leader of the Opposition two years later, in the aftermath of a donations scandal that toppled Wolfgang Schäuble. The scandal might have been picked to help her into position.

Merkel's have been criticized for her close identification with US foreign policy. Two years before she became Chancellor, she gave a long and glowing defence of the US invasion of Iraq in the German Bundestag (parliament).[3]

In February 2021 she stated that "I stressed in my intervention that the pandemic is not over until all people in the world have been vaccinated,"[4] and later that “We have all agreed that we need vaccine certificates.”[5] In May 2021 she opposed the move to waive IP provisions on COVID-19/Vaccines.

A Quote by Angela Merkel