Anna Lindh was Sweden's Minister of Foreign Affairs when she was stabbed by Mijailo Mijailović in a Stockholm department store on 10 September 2003, just over 4 months after attending her first Bilderberg. She died in Karolinska Hospital the following day.

Anna Lindh was married to Bo Holmberg, Governor of Södermanland (her home constituency for over 20 years), with whom she had two sons.[1]

Anna Lindh served as a Social Democratic party politician in Parliament from 1982 until 1985, and again from 1998 until her death in 2003. From 1991 to 1994, she was Commissioner of Culture and Environment and the deputy mayor of Stockholm. In 1994 Prime Minister Ingvar Carlsson appointed her Minister for the Environment. One of Lindh's legacies was her pioneering work towards European Union legislation on hazardous chemical substances. She also called for the establishment of a common EU strategy against acid rain.

After the 1998 General Election, PM Göran Persson appointed Lindh Minister of Foreign Affairs in the new government. Having made influential friends around the world as president of the Swedish Social Democratic Youth League, Lindh ardently supported international cooperation through the United Nations and in the European Union. 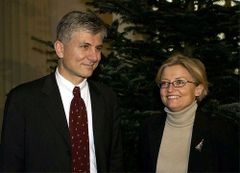 Travelling with EU foreign and security policy spokesman Javier Solana in Macedonia during the Kosovo-Macedonian crisis, she negotiated an agreement which averted a civil war in the country.

Having invited Serbian Prime Minister Zoran Đinđić to Stockholm, Anna Lindh was due to meet Đinđić in Belgrade in March 2003, moments before his assassination. Six months later, Lindh was stabbed to death by Mijailo Mijailović, an assassin of Serbian extraction. Eight years after being convicted of her murder, Mijailović told the Expressen:

"I felt hate for politicians, both Swedish and Serbian. I blamed them for all my own failures in life."[2]

Anna Lindh criticised the 2003 Iraq War, saying that "a war being fought without support in the statutes of the United Nations is a major failure" but praised the fall of Saddam Hussein. She advocated greater respect for international law and human rights in the Israeli-Palestinian conflict, criticising Ariel Sharon's Israeli government but also condemning Palestinian suicide bombings as "atrocities". She argued strongly for an end to Israeli occupation of Palestinian territories; in an interview shortly before her death she said:

"Israeli settlement in the West Bank must go; there must be a Palestinian state; Israel must vacate all occupied areas on the West Bank and Gaza Strip and end all extra-territorial executions and attacks on Palestinians."

During the final weeks of her life she was involved in the pro-euro campaign preceding the Swedish referendum on the euro, held on 14 September 2003 (three days after her death). As a popular pro-euro politician, she was a spokesperson for the campaign; her face was on billboards across Sweden the day she was murdered.[3]

Foreshadowing the fate of Jo Cox, Anna Lindh was assassinated in the run up to a Swedish referendum about EU membership. The official narrative is that her murder had no deep political significance, that she was killed on a whim by "lone nut" Mijailo Mijailovic while he was high on Flunitrazepam. He reportedly expressed little sign of remorse during the trial and gave few clues as to his motives, claiming 8 years later to have done it on impulse.[4]

This page imported content from Wikipedia on 18 June 2016.
Wikipedia is not affiliated with Wikispooks.   Original page source here
Retrieved from "https://wikispooks.com/w/index.php?title=Anna_Lindh&oldid=220257"
Categories: