The Australian Labor Party (ALP) is one of two major parties in Australian politics, along with the centre-right Liberal Party of Australia.

The Labor Party has always had a left wing and a right wing, but since the 1970s it has been organised into formal factions, to which party members may belong and often pay an additional membership fee. The two largest factions are Labor Right and Labor Left. Labor Right generally supports free-market policies and the US alliance and tends to be conservative on some social issues. The Labor Left favours more state intervention in the economy, is generally less enthusiastic about the US alliance and is often more progressive on social issues. The national factions are themselves divided into sub-factions, primarily state-based such as Centre Unity in New South Wales and Labor Forum in Queensland. Some trade unions are affiliated with the Labor Party and are also factionally aligned.

The Liberal Party sees itself as the state-bearing party with a birthright to rule (with deeper ties to the deep state than Labor, similar to the Tories in the UK). With control over the press, economy and senior bureaucracy, it normally lets Labor rule only when an economic recession is looming.

The deep state has engineered several campaigns to unseat Labor, such as in 1949, when Prime Minister Ben Chifley and Foreign Affairs Minister Herbert Vere Evatt were considered ‘unsafe’; or most famously in 1975, with the coup against PM Gough Whitlam.

Since then, most Labor leaders have either been "confidential informers" to the US, or deep state functionaries (Kevin Rudd).

Many leaders of the ALP have been particularly notable in the COVID-19 deep event and the implementation of mandatory vaccines.

ALP Premier Daniel Andrews in Victoria led the longest lockdowns in the world and forced the vast majority of the population to take the COVID-19 vaccines with coercive measures. Michael Gunner Leader of the Northern Territory government, conducted an equally ruthless policy, as did Mark McGowan, the Premier of Western Australia and Annastacia Palaszczuk in Queensland. All Labor state governments introduced policies to "lock out" the "unvaccinated" from the economy.[1] 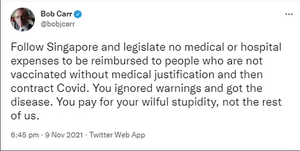 In December 2021, Rudd called Senator Gerard Rennick, one of the few public voices against the deep state COVID-policy "a far right, anti-vaxx nut job." Kevin Rudd is President and CEO of the Asia Society with a salary of $988,541. The Asia Society is part-financed by Pfizer.[3][4]