From Wikispooks
(Redirected from BRICS)
Jump to navigation Jump to search

The BRICS' New Development Bank[1] is a multilateral development bank operated by the BRICS states (Brazil, Russia, India, China and South Africa) as an alternative to the existing World Bank and International Monetary Fund (IMF).[2] The Bank is setup to foster greater financial and development cooperation among the five emerging markets. It is headquartered in Shanghai, China[3] and its first Chief Executive comes from India.[4]

BRICS countries account for 46 percent of the world’s population – over 3 billion people, as of 2015 – making it the single largest bloc in terms of human capacity among global alliances. The scope of BRICS, combined with its increasing assertiveness as an economic power, has undoubtedly ruffled a few feathers in Washington and elsewhere in the West. In March 2016, it was reported that the United States and its allies had taken action to undermine each BRICS member nation and destabilise them through political and economic means. Those leaders shown smiling and shaking hands at recent BRICS summits are now either the targets of destabilisation efforts and subversion – as in the cases of Brazil, Russia, China and South Africa – or are a target of a military and political charm offensive, as in the case of India.[5][6]

In August 2017 China, the chairing state, invited five new participants to the 2017 BRICS summit in early September in Xiamen, Fujian Province: Egypt, Guinea, Mexico, Tajikistan and Thailand.[7] By the time of the 11th summit in Brazil in November 2019, questions were being raised about the continued relevance of BRICS.[8] 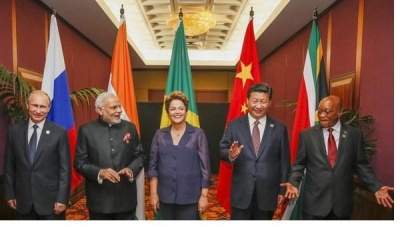 BRICS' New Development Bank was agreed to by BRICS leaders at the 5th BRICS summit held in Durban, South Africa on 27 March 2013. On 15 July 2014, the first day of the 6th BRICS summit held in Fortaleza, Brazil, the group of emerging economies signed the long-anticipated document to create the $100 billion BRICS Development Bank and a reserve currency pool worth over another $100 billion.[9] Both will counter the influence of Western-based lending institutions and the dollar. Documents on cooperation between BRICS export credit agencies and an agreement of cooperation on innovation were also signed.[10] Shanghai was selected as the headquarters after competition from New Delhi and Johannesburg.

In May 2015, it was reported that Greece had been invited to become the sixth member of BRICS:

"Greek Prime Minister Alexis Tsipras said Greece is interested in the offer, and promised to thoroughly examine it. He will have a chance to discuss the invitation with the other BRICS leaders during the June 2015 International Economic Forum in St Petersburg,” the report read.[14]

The 7th BRICS summit, held on 8-9 July 2015 in the Russian city of Ufa in Bashkortostan, marked the entry into force of the Agreement on the New Development Bank.[15]

The bank's primary focus of lending will be infrastructure projects [16][17] with authorized lending of up to $34 billion annually.[18] South Africa will be the African Headquarters of the Bank named the, "New Development Bank Africa Regional Centre".[19] The bank will have starting capital of $50 billion, with capital increased to $100 billion over time.[20] Brazil, Russia, India, China and South Africa will initially contribute $10 billion each to bring the total to $50 billion.[21][22] Each member cannot increase its share of capital without all other 4 members agreeing. This was a primary requirement of India.[23][24] The bank will allow new members to join but the BRICS capital share cannot fall below 55%.[25]

The objective of this reserve is to provide protection against global liquidity pressures.[26][27][28] This includes currency issues where members' national currencies are being adversely affected by global financial pressures.[29][30][31]

The Bank would also provide assistance to other countries suffering from the economic volatility in the wake of the United States' exit from its expansionary monetary policy.[32]

This fund will consist of $10 billion of "paid-in capital" ($2 billion from each member to be provided over seven years) and an additional $40 billion to be "paid upon request".[33] Out of the total initial capital of $100 billion, China will contribute $41 billion, Brazil, Russia and India would give $18 billion each, and South Africa would contribute $5 billion.[34] It is scheduled to start lending in 2016 and be open to membership by other countries, but the capital share of the BRICS cannot drop below 55 percent.[35] 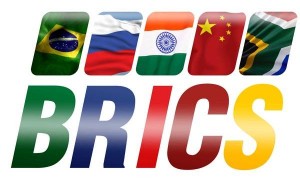 In an August 2015 interview with independent journalist James Corbett, Devon Douglas-Bowers of the Hampton Institute argued that the BRICS' NDB "complements" the Bretton Woods institutions rather than rivalling them:

What are BRICS and the Asian Infrastructure Investment Bank (AAIB) really about? Many people argue that it is these countries challenging the dominate US-based system. How is that true or not true in some respects? Who is contending that the AIIB or the BRICS' New Development Bank is in any way competitive with the Bretton Woods institutions (IMF/World Bank)? Certainly not anyone involved with any of these institutions.

In June, World Bank chief Jim Yong Kim issued a statement congratulating the AIIB on its formation and calling it an "important new partner" for the Washington-led development bank.

In July, NDB President Kundapur Vaman Kamath returned the favour, conceding that the NDB and the IMF/World Bank are complementary institutions, not rivals.

Also in July, the AIIB and the World Bank signed an actual cooperation agreement, promising to identify projects for joint financing later this year.

No, these institutions do not view themselves as competitive. It is only various media pundits who have speculated that these new banks are in fact some sort of challenge to the so-called "Washington consensus." What none of these experts has bothered to report (for obvious reasons) is the remarkable fact that Paulo Nogueira Batista, Vice President of the NDB, is also an Executive Board member of the IMF, who then went on to pledge cooperation and joint action between the NDB and IMF. Also missing from this narrative is the fact that the NDB's chief, K.V. Kamath, is a former staffer of the supposed NDB "rival" Asia Development Bank. Or there's Jin Liqun, widely tipped to be the head of the AIIB, who also happens to be a former Vice President of the Asia Development Bank and alternative Executive Director of the World Bank.

In fact, the only sign that these Beijing-backed development banks pose any challenge to the existing order whatsoever is that the NDB has already confirmed that their first loan will be denominated in yuan, not dollars, and the AIIB is considering a basket of currencies, including the yuan.

But even this is not as much of a challenge to the Bretton Woods institutions as it appears on first glance. Although Beijing is obviously seeking to bolster the yuan as an international settlement currency, this is not being done in an effort to make the yuan itself a world reserve currency in the same way that the dollar is today. Instead, this is being done in service of a policy goal outlined by People's Bank of China Governor Zhou Xiaochuan in 2009 that is seeking to establish the "Special Drawing Rights" currency basket as the new world reserve currency.

China's goal is to have the yuan included in the SDR basket along with the dollar, yen, euro and pound. But the SDR itself is issued and administered by the IMF so once again we see that Beijing is not seeking to undermine these US-led hegemonic institutions at all, merely to increase their status and clout within these institutions.[36][37]

This page imported content from Wikipedia on 22 July 2014.
Wikipedia is not affiliated with Wikispooks.   Original page source here
Retrieved from "https://wikispooks.com/w/index.php?title=New_Development_Bank&oldid=204548"
Categories: