Baha Mousa was an Iraqi civilian who was murdered by British army soldiers whilst in their custody in Basra in September 2003.[1] 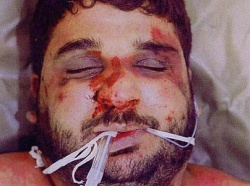 On 14 September 2003 Baha Mousa, a 26-year-old hotel receptionist, was arrested along with six other men and taken to a British base. Whilst in detention Mousa and the other captives were hooded and severely assaulted by a number of British troops. Two days later he was found dead [2]. A post-mortem examination found that Baha suffered multiple injuries (at least ninety-three), including fractured ribs and a broken nose, which were 'in part' the cause of his death.[3]

Seven members of the Duke of Lancaster's Regiment stood trial accused of several charges relating to the ill treatment of detainees, including those of war crimes under the International Criminal Court Act 2001. On September 19, 2006, Corporal Donald Payne pleaded guilty to a charge of inhumane treatment to persons making him the first member of the British armed forces to plead guilty to a war crime [4]. He was subsequently jailed for one year and expelled from the army. Six other soldiers were cleared of any wrongdoing [5]. The presiding judge, Mr Justice McKinnon, stated that "none of those soldiers has been charged with any offence, simply because there is no evidence against them as a result of a more or less obvious closing of ranks." [6]

On 27 March 2008, the British Defence Secretary, Des Browne, admitted to "substantial breaches" of the European Convention of Human Rights over the murder of Baha Mousa.[7] In July 2008 the Ministry of Defence agreed to pay £2.83 million in compensation to the family of Baha Mousa and nine other men, following an admission of "substantive breaches" of articles 2 and 3 (right to life and prohibition of torture) of the European Convention on Human Rights by the British Army.[8]

Court rulings based on this case

Phil Shiner's response to the judgement

Baha Mousa died of 93 injuries. For the 36 hours this 26-year-old Iraqi survived in British detention, he was hooded, deprived of sleep, food and water, and forced to maintain the "ski" stress position.

Hassan, 14, was forced to give a man oral sex and maintain a prolonged simulated sex position. The watching soldiers laughed out loud. The MoD wants us to believe these were isolated incidents in Iraq and that the "few bad apples" thesis prevails. But has there been systematic abuse by the British during its occupation of Iraq?

The MoD agreed to pay £2.83m last week to Mousa's family and the other nine survivors of the incident. They too had been tortured and subjected to the five banned interrogation techniques from Northern Ireland: hooding, stressing, withholding of food and drink, sleep deprivation and the use of noise.

There are a growing number of other cases in the English courts concerning killings, torture, and the use of these interrogation techniques by the British in Iraq. One of these concerns allegations that, in 2004, 20 Iraqis were executed and another nine tortured in detention at Naji. Another concerns five Iraqis abused and hooded as recently as April 2007.

The evidence from the court martial into Mousa's death is compelling. Hooding and stressing was written policy. Interrogators were trained in these techniques which reflected "verbal and written NATO policy". The head of the Army's legal service in Iraq, Lt Col Nicholas Mercer, and the Red Cross complained bitterly about hooding and stressing and tried to get the chain of command to apply basic human rights, but were rebuked.

The policy continued even after Mousa's death because, it seems, the United States was already complaining that British interrogation techniques were too "soft", as they put it. Sexual and religious humiliation and coercive interrogation are among the psychological and physiological techniques used by both the US and Britain during the Cold War, yet they are prohibited by numerous human-rights conventions.

Detainees tend to be arrested at dawn, when their physiological powers are lowest, and then "conditioned" to maintain the shock of being captured. An exhausted detainee subjected to prolonged hooding, stressing, food, water and sleep deprivation or enforced exercise is much more likely to be susceptible to coercive interrogation techniques. Similarly, sexual humiliation is part of a systematic approach designed to produce not just debility, but a complete stripping of a person's identity, self-respect and sense of order.

The Government banned the five techniques in 1972 and promised that if any other government wanted to reintroduce them, it would be for Parliament to decide. There should, therefore, be a national outcry at the fact that they were covertly reintroduced, just as there would be if Hassan had been subjected to this shocking abuse by policemen or prison officers in Britain.

It seems, though, that British society cannot face the truth about itself. The alleged massacre in Naji in 2004 is redolent of colonial times, as is the shocking disregard for Iraqis' humanity and sensitivities (for example, the codenaming of one operation was "Ali Baba").

Once the legal standards had been set so low, interrogation techniques that violated the prohibition on torture leached into a propensity for mindless savagery and thuggery. Our Foreign and Defence Secretaries choose to ignore the evidence of systematic abuse and use of psychological techniques, on the grounds that "a few rogue elements have been weeded out".

If the detailed evidence to the contrary was not so tragic, I, too, would laugh out loud.

In a written statement given in Parliament on 14 May 2008 the Secretary of State for Defence announced that there would be a public inquiry into the death of Baha Mousa chaired by Right Honourable Sir William Gage, a retired Court of Appeal judge and with the following terms of reference: [10]

"To investigate and report on the circumstances surrounding the death of Baha Mousa and the treatment of those detained with him, taking account of the investigations which have already taken place, in particular where responsibility lay for approving the practice of conditioning detainees by any members of the 1st Battalion, The Queen’s Lancashire Regiment in Iraq in 2003, and to make recommendations."

The Inquiry published its report on 8 September 2011 [11] Commenting in The Guardian, Phil Shiner who is a lawyer representing a further 150 victimes of alleged British army abuse between 2003 and 2008 commented:

Although the MoD now solemnly assures us that the necessary reforms have been made to the detention policies, so that a few bad apples cannot behave so disgracefully again, this is a wholly disingenuous and misleading public position on matters of such importance. There are several reasons for this. First, this incident is not limited to one battle group, 1QLR, and one set of shameful events.

I act for over 150 other Iraqis in a court of appeal case where the judgment is due next month on our argument that there must be a single inquiry into the UK's detention policy in Iraq. These cases span the period of March 2003 to December 2008, involve at least 14 different UK facilities and implicate numerous battle groups. The allegations made are shocking and involve a range of techniques and practices which were simply not on Sir William's radar: unbelievably debased sexual behaviour, mock executions, vicious threats of rape of detainees' female relatives, and systematic use of hooding, sleep deprivation, sensory deprivation, temperature manipulation and solitary confinement for weeks.

Second, many of these techniques reflected the completely unlawful coercive interrogation practices that were trained in at Chicksands and then allegedly deployed in Iraq by the secretive joint forward interrogation team. JFIT was outside the military chain of command, and Iraqis held in its closed compound in incommunicado detention were completely at the mercy of the cruel shadowy figures.

Third, the MoD shows no signs of behaving as anything but a disgraceful outfit. I expect it will no doubt do its utmost not to properly implement Sir William's 73 carefully measured recommendations. It will continue to spin and engage in the defensive damage limitation exercises of which Sir William was so critical. It will continue to hide damaging documents, mislead our courts, run unworthy legal arguments and use its mighty coercive power to keep the public in the dark, not just about Iraq but also Afghanistan.... [12]