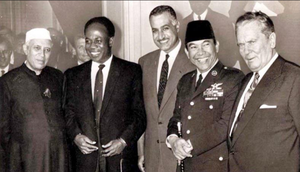 5 world leaders in Bandung. From left to right: Jawaharlal Nehru (India); Kwame Nkrumah (Ghana; Gamal Abdel Nasser (Egypt);Sukarno (Indonesia); and Tito (Yugoslavia). Nkrumah and Sukarno would be toppled by CIA coups, Nasser was heavily sabotaged, Yugoslavia was dismantled by a series of US/NATO interventions in the 1990s. China's Zhou Enlai (not pictured) was attempted murdered by the CIA/KMT on the way to the conference.

The first large-scale Asian–African or Afro–Asian Conference—also known as the Bandung Conference —was a meeting of Asian and African states, most of which were newly independent, which took place on 18–24 April 1955 in Bandung, Indonesia.[1] The twenty-nine countries that participated represented a total population of 1.5 billion people, 54% of the world's population.[2]

The conference's stated aims were to promote Afro-Asian economic and cultural cooperation and to oppose colonialism or neocolonialism by any nation. The conference was an important step towards the eventual creation of the Non-Aligned Movement, but with declaring the wish for neutrality, the participants also became targets for decades of US foreign policy interventions.

Indonesia's President Sukarno and India's prime minister Jawaharlal Nehru were key organizers, in his quest to build a nonaligned movement that would win the support of the newly emerging nations of Asia and Africa. Nehru first got the idea at the Asian Relations Conference, held in India in March 1947, on the eve of India's independence. There was a second 19-nation conference regarding the status of Indonesia, held in New Delhi, India, in January 1949. Practically every month a new nation in Africa or Asia emerged with, for the first time, its own diplomatic corps and eagerness to integrate into the international system.

Mao Zedong of China was also a key organizer, backed by his influential right-hand man, Premier and Foreign Minister Zhou Enlai; although Mao still maintained good relations with the Soviet Union in these years, he had the strategic foresight to recognize that an anti-colonial nationalist and anti-imperialist agenda would sweep Africa and Asia, and he saw himself as the natural global leader of these forces as he, after all, had also led a revolution in China marked by anti-colonial nationalism.[3]

At the Colombo Powers conference in April 1954, Indonesia proposed a global conference. A planning group met in Bogor, Indonesia in late December 1954 and formally decided to hold the conference in April 1955. They had a series of goals in mind: to promote goodwill and cooperation among the new nations; to explore in advance their mutual interests; to examine social economic and cultural problems, to focus on problems of special interest to their peoples, such as racism and colonialism, and to enhance the international visibility of Asia and Africa in world affairs.[4]

The Bandung Conference reflected what the organizers regarded as a reluctance by the Western powers to consult with them on decisions affecting Asia in a setting of Cold War tensions; their concern over tension between the People's Republic of China and the United States; their desire to lay firmer foundations for China's peace relations with themselves and the West; their opposition to colonialism, especially French influence in North Africa and its colonial rule in Algeria; and Indonesia's desire to promote its case in the dispute with the Netherlands over western New Guinea (Irian Barat). 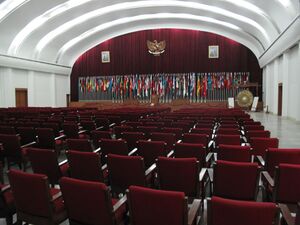 Plenary hall of the conference building

Major debate centered around the question of whether Soviet policies in Eastern Europe and Central Asia should be censured along with Western colonialism. A memo was submitted by 'The Moslem Nations under Soviet Imperialism', accusing the Soviet authorities of massacres and mass deportations in Muslim regions, but it was never debated.[5] A consensus was reached in which "colonialism in all of its manifestations" was condemned, implicitly censuring the Soviet Union, as well as the West.[6] China played an important role in the conference and strengthened its relations with other Asian nations. Having survived an assassination attempt on the way to the conference, the Chinese premier, Zhou Enlai, displayed a moderate and conciliatory attitude that tended to quiet fears of some anticommunist delegates concerning China's intentions.

Zhou downplayed revolutionary communism and strongly endorsed the right of all nations to choose their own economic and political systems, including even capitalism. His moderation made a very powerful impression for his own diplomatic reputation and for China. By contrast, Nehru was bitterly disappointed at the generally negative reception he received. Senior diplomats called him arrogant. Zhou said privately, "I have never met a more arrogant man than Mr. Nehru."[7][8][9][10] 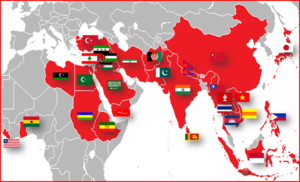 The 29 participants represented 54% of the world's population

In addition to the 29 participants, some nations were given "observer status". Such was the case of Brazil, who sent Ambassador Bezerra de Menezes.

Representative Adam Clayton Powell, Jr. (D-N.Y.) attended the conference, sponsored by Ebony and Jet magazines instead of the U.S. government. Powell spoke at some length in favor of American foreign policy there which assisted the United States's standing with the Non-Aligned. When Powell returned to the United States, he urged President Dwight D. Eisenhower and Congress to oppose colonialism and pay attention to the priorities of emerging Third World nations.[11]

African American author Richard Wright attended the conference with funding from the Congress for Cultural Freedom, a CIA front organization. Wright spent about three weeks in Indonesia, devoting a week to attending the conference and the rest of his time to interacting with Indonesian artists and intellectuals in preparation to write several articles and a book on his trip to Indonesia and attendance at the conference. Wright's essays on the trip appeared in several Congress for Cultural Freedom magazines, and his book on the trip was published as The Color Curtain: A Report on the Bandung Conference. Several of the artists and intellectuals with whom Wright interacted (including Mochtar Lubis, Asrul Sani, Sitor Situmorang, and Beb Vuyk) continued discussing Wright's visit after he left Indonesia.[12]

A 10-point "declaration on promotion of world peace and cooperation", called Dasasila Bandung, incorporating the principles of the United Nations Charter was adopted unanimously as item G in the final communiqué of the conference:

The final Communique of the Conference underscored the need for developing countries to loosen their economic dependence on the leading industrialized nations by providing technical assistance to one another through the exchange of experts and technical assistance for developmental projects, as well as the exchange of technological know-how and the establishment of regional training and research institutes.

The United States, at the urging of Secretary of State John Foster Dulles, shunned the conference and was not officially represented.

The US security establishment also feared that the Conference would expand China's regional power.[14] In January 1955 the US formed a "Working Group on the Afro-Asian Conference" which included the Operations Coordinating Board (OCB), the Office of Intelligence Research (OIR), the Department of State, the Department of Defense, the Central Intelligence Agency (CIA), and the United States Information Agency (USIA).[15] The OIR and USIA followed a course of "Image Management" for the US, using overt and covert propaganda to portray the US as friendly and to warn participants of the Communist menace.[16]

Dulles gave the clue to the US future strategy towards the movement when on June 9, 1955, he argued in one speech that "neutrality has increasingly become an obsolete and, except under very exceptional circumstances, it is an immoral and shortsighted conception."[17]

For the US, the Conference accentuated a central dilemma of its Cold War policy: by currying favor with Third World nations by claiming opposition to colonialism, it risked alienating its colonialist European allies.[18] 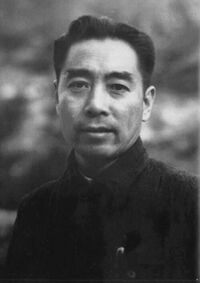 There CIA and the KMT government on Taiwan attempted to kill the Chinese participant, Premier Zhou Enlai. The Kashmir Princess was a chartered Lockheed L-749A Constellation aircraft owned by Air India. On 11 April 1955, it was damaged in midair by a bomb explosion and crashed into the South China Sea while en route from Bombay, India, and Hong Kong to Jakarta, Indonesia.[19] Sixteen of those on board were killed, while three survived.[20] The target of the assassination, Zhou Enlai, missed the flight due to a medical emergency and was not on board.

The Soviet reaction was guarded[citation needed], but did not attempt a similar campaign to kill or sabotage the non-aligned movement as the United States.

The conference was followed by the Afro-Asian People's Solidarity Conference in Cairo[21] in September (1957) and the Belgrade Conference (1961), which led to the establishment of the Non-Aligned Movement.[22]

In 2005, on the 50th anniversary of the original conference, leaders from Asian and African countries met in Jakarta and Bandung to launch the New Asian–African Strategic Partnership (NAASP). They pledged to promote political, economic, and cultural cooperation between the two continents.