Baylor University, or simply Baylor, is a private Baptist research university in Waco, Texas. Baylor was chartered in 1845 by the last Congress of the Republic of Texas. Baylor is the oldest continuously operating university in Texas and one of the first educational institutions west of the Mississippi River in the United States. Upon the banks of the Brazos River next to I-35, between the Dallas-Fort Worth Metroplex and Austin, the university's 1,000-acre (400-hectare) campus is Earth's largest Baptist University.[1] It is classified among "R2: Doctoral Universities – High research activity".[2] The university grants undergraduate and graduate degrees, including doctoral and professional degrees.

Baylor University has a strong history of military service dating back to before the Civil War and currently offers both Army and Air Force ROTC for students. Baylor graduates have served in every major military engagement in Texas history. Formal Military instruction began on campus in 1888. 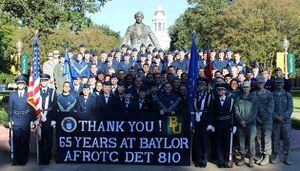 In July 1948, the Air Force and Baylor University partnered in the creation of Air Force ROTC Detachment 810 - one of the first detachments ever created. In 2008, Detachment 810 was awarded the Air Force ROTC Right Of Line Award as the No. 1 large detachment in the nation. The unit was additionally awarded the High Flight Award, recognizing it as one of the top four detachments in America. It has been named best in the AFROTC Southwest Region for 1996, 2003 and 2008. 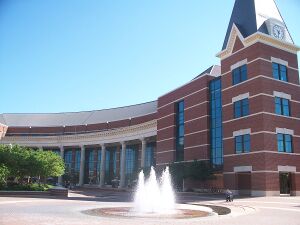 In 2005, the university was invited to join the Collider Detector at Fermilab (CDF) collaboration at the Fermi National Accelerator Laboratory in Batavia, Illinois.[5] The project is one of the world's largest experimental physics collaborations. The following year, Carnegie Foundation upgraded the university's classification to "Research University" status with "High Research Activity".[6][2] 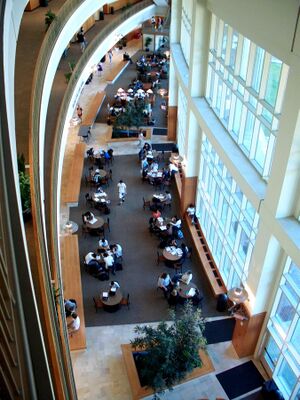 The interior of the Baylor Sciences Building

In October 2009, a group of state, county and city governments and organizations and higher educational institutions in Central Texas announced the creation of the Central Texas Technology and Research Park, and the park's first project, the Baylor Research and Innovation Collaborative (BRIC) to be housed in the former General Tire facility on South Loop Drive in Waco. Funding for the effort came from the state of Texas and Baylor University. Clifton Robinson (a member of Baylor's Board of Regents) donated the facility to the university to support the research collaborative.[7][8] 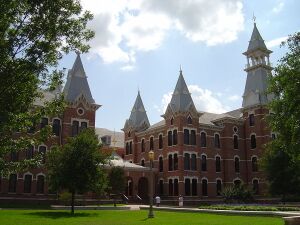 The university's endowment passed $1 billion in 2007 and reached $1,055,478,000 on December 31, 2007.[11] Even with the economic crisis of 2008, Baylor spokesperson Lori Fogleman reported that Baylor's endowment grew 5.1 percent in the fiscal year ending June 30, 2008; the National Association of College and University Business Officials estimated that during that same period, the median return for the top 25 percent of college endowments decreased by 2.2 percent. Fogleman cited the university's long-term investments and diversified holdings as the cause of the endowment's success. Despite a hired consulting firm's concerns that the troubled economy and disagreements within the Baylor community could hinder continued growth, the university's endowment exceeded $1.1 billion as of 2013.

On March 4, 2010, "An anonymous longtime Baylor donor ... set up an estate provision that will benefit the school to the tune of an estimated $200 million. The gift will bolster Baylor's research on the issues of aging in multiple disciplines at the school."[12] Citing the most recent data reported by the Chronicle of Higher Education, Baylor officials say the $200 million donation is the second-largest gift to a Texas college or university and ranks among the top 20 private gifts to higher education institutions in the country.[13]