Beatrice Fihn has worked with disarmament issues and multilateral negotiations since 2006. She is currently the Executive Director of the International Campaign to Abolish Nuclear Weapons (ICAN) where she is managing the campaign of 425 NGOs working together for a treaty banning nuclear weapons.[1]

On 6 October 2017, following the Nobel Committee's announcement that ICAN had won the 2017 Nobel Peace Prize, Beatrice Fihn said Trump “puts a spotlight” on the dangers of nuclear weapons:

“The election of President Donald Trump has made a lot of people feel very uncomfortable with the fact that he alone can authorise the use of nuclear weapons,” she told reporters in Geneva, adding that “there are no right hands for nuclear weapons”.

Fihn, who called Trump “a moron” in a Twitter post just two days before the peace prize announcement,[2] said the award sent a message to all nuclear-armed states that “we can’t threaten to indiscriminately slaughter hundreds of thousands of civilians in the name of security”.[3]

One "impulsive tantrum away"

The destruction of humankind is one “impulsive tantrum away”, the Australian-founded winner of the Nobel peace prize, the International Campaign to Abolish Nuclear Weapons, warned overnight on Sunday 10 December 2017 as the United States and North Korea exchanged threats over Pyongyang’s nuclear testing regime:

“The only rational course of action is to cease living under the conditions where our mutual destruction is only one impulsive tantrum away. Nuclear weapons are a madman’s gun held permanently to our temple.”[4]

Previously, Beatrice Fihn managed the disarmament programme at the 'Women’s International League for Peace and Freedom' and the 'Reaching Critical Will' project. She has written extensively on disarmament processes and civil society engagement. She has a law degree from the University of London.[5]

A Document by Beatrice Fihn 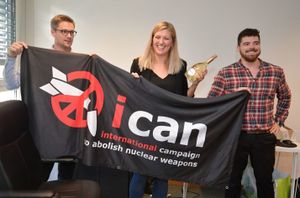