The 1981 Bilderberg Meeting was the 29th such meeting and had participants from 18 European countries, the United States, Canada and "various international organizations".[1] It was chaired by Walter Scheel, and was held at the Palace Hotel, Bürgenstock, Switzerland. The 98 guests included 14 business executives, 21 politicians, 11 financiers, 13 editors/journalists and 6 academics.

The 1981 Bilderberg Conference Report has been leaked and is now online. There were three topics on the agenda, followed by a morning's panel discussion.[1]

1. What Should Western Policy Be Toward the Soviet Union in the 1980's?

There were two working papers. The first was by George Ball. The second working paper was by Gaston E. Thorn.

3. How Can the Western Economies Put Their House in Order?

There were two working papers. The first, by Herbert Stein, was entitled Economic Problems of the Industrial Democracies: A View from the United States. The second working paper, by Alfred Herrhausen, was entitled How Can The Western Economies Put Their House in Order?

The first topic, introduced by a paper from Emile van Lennep, was of international economic issues. The second was a discussion of current events.[1] 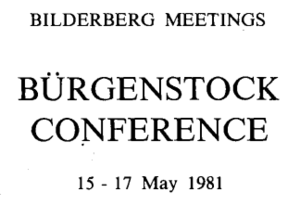