Biological weapons are organisms, viruses or biological toxins intended for use as destructive agents, typically by infecting and incapacitating or killing people.

Research into biological weapons is allowed for defensive purposes. In practice, this is difficult or impossible to differentiate from offensive research.

“The SARS-CoV-2 coronavirus features a so-called furin cleavage site (FCS), which makes the virus more infectious and virulent than it would otherwise be. Such an FCS is not known in any other SARS-like coronavirus, but it is often inserted as part of gain-of-function studies in virus research. However, similar FCS are known to occur in non-SARS-like coronaviruses, hence a natural origin cannot be excluded based on this. The furin cleavage site found in SARS-CoV-2 uses an arginine (amino acid) double codon, which is rather rare in natural coronaviruses, but quite common in engineered viruses used in lab experiments (...)”
' [1]

In over 200 cases the US tested bioweapons on their own citizens, according to 'official' news in the commercially-controlled media.[2] Preparations overlap with "Terrorism/Preparation" since Anthrax was used in a false flag event and Pandemic/Preparation as the proposed solution is preemtive development and large scale funding of new (genetically modified) vaccines.

The development of ethnic bioweapons and their projected use has been a matter of discussion for decades.[3][4]

In 2003 ABC News reported on Sergei Kolesnikov's claim that the virus was made in a laboratory.[7] The Sydney Morning Herald headlined a 2008 article SARS a Chinese weapon: Taiwan official which began "Taiwan's top national security chief was forced to apologise after suggesting the deadly SARS virus could have been developed in Chinese laboratories as a bio-weapon. National Security Bureau director Tsai Chao-ming..."[8]

In February 2009, Baxter International shipped 72 kg material to 16 laboratories in 4 countries. The material was marked as vaccine, but contained live H5N1 avian flu virus material as well as a mix of H3N2 seasonal flu viruses.[9]

Research into the most hazardous substances and so called "feature enhancement" is carried out at Biosafety level 4 facilities. The diseases studied there are fatal to humans and animals and with no known cure.[11]

The United States operates a high number of level 4 labs worldwide.[12][13] Accidents and carelessness on the side management shows, that it is not possible to operate these labs, even those with the highest security level, safely all the time.[14] Especially notorious is the Plum Island bio lab near Long island.[15][16] It was operated only as a biosafety level 3 lab,[17] but it stands as an well documented example for technical and administrative problems that these facilities face. The research facility at Fort Detrick was shut down by the CDC in July 2019, citing failure to follow local procedures, lack of periodic recertification training for workers in the biocontainment laboratories and problems with the wastewater decontamination system.[18] 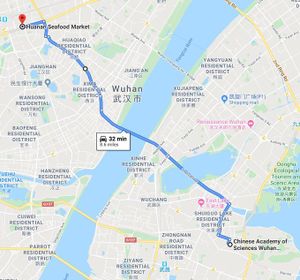 The only such facility in mainland China is the Wuhan Institute of Virology of the Chinese Academy of Sciences, 8.6 miles from the Huanan Seafood Wholesale Market which the World Health Organization linked to the first reported cluster of Covid-19 patients, 44 people who became unwell with pneumonia of unknown cause, at the start of what was then referred to as the Wuhan coronavirus outbreak, later the 2020 coronavirus pandemic.