Boycott, Divestment and Sanctions (BDS) is a global campaign to increase economic and political pressure on Israel to end its occupation and colonisation of Palestinian land and the Golan Heights, provide full and equal rights for Arab citizens of Israel, and respect the right of return of Palestinian refugees.[1]

The campaign, which is organised and coordinated by the Palestinian BDS National Committee, was started on 9 July 2005 by over 170 Palestinian NGOs in support of the Palestinian cause for boycotting, divestment and international sanctions against Israel. Citing a body of UN resolutions and specifically echoing the anti-apartheid campaigns against white minority rule in apartheid-era South Africa, the BDS campaign called for "various forms of boycott against Israel until it meets its obligations under international law".[2]

In July 2018, Socialist International bringing together 140 global political parties, reaffirmed the Palestinian people’s right to self-determination and called on governments and civil organisations to “activate Boycott, Divestment and Sanctions (BDS) against the Israeli occupation.” It called for the “total embargo on all forms of military trade and cooperation with Israel as long as it continues its policies of occupation and Apartheid against the people of Palestine.”

SI strongly condemned Israel’s “racist laws,” and expressed its solidarity with Palestinian citizens of Israel, who “continue to live under a system of institutionalised discrimination.”

"Given its sheer size and global reach, Socialist International’s call for sanctions against Israel is a game-changer in the global BDS movement.

"It is the most significant call for sanctions against Israel to date since BDS was launched in 2005. BDS activists expect it to blow wind in the sails of the BDS movement and in particular, to mainstream the call for a military embargo on Israel after its massacre of over 130 unarmed protesters in Gaza in May.

"We deeply value Socialist International’s principled solidarity with the people of Palestine and salute them for taking concrete measures to hold Israel accountable for its decades-old regime of military occupation, colonialism and apartheid.

"We look forward to the implementation of this momentous declaration in SI members’ home countries."[3]

In April 2018, it was reported that Israeli-American actress Natalie Portman had pulled out of a major award ceremony, the Genesis Prize, due to take place in Israel in June 2018, citing her “distress” at recent events in the country.

She didn't specify which events had distressed her, but the Israeli military's ongoing killing and wounding of Palestinian civilians on the Gaza-Israel border continues to provoke worldwide condemnation.

Increasing pressure on prominent personalities planning to visit Israel has been applied by the Boycott, Divestment and Sanctions group, which accuses the Jewish state over its treatment of Palestinians in Gaza and the West Bank.

After 26 Oscar nominees were given Israel tour packages as part of their 2017 Academy Awards swag bags, for instance, BDS issued a statement urging stars not to take up the offer and none of them did.[4]

In October 2015, David Cameron's Conservative government announced it planned to stop ‘divisive’ town hall boycotts and sanctions against Israel.[5] Among the examples it cited was a 2014 decision by Leicester City Council to boycott goods from Israeli settlements in the occupied West Bank.[6] The proposals indicated that Israel’s supporters were perturbed about the growth of the BDS movement and followed a successful targeting of Veolia, a major corporation that has been involved in building a light rail network for Israel’s settlements in occupied East Jerusalem. Veolia has been excluded from municipal contracts collectively worth billions of dollars because of decisions taken by councils in the UK and further afield. Because of that pressure, Veolia was forced to sell its investments in Israel.

Foreign Secretary Philip Hammond said he wants to stop authorities where the Labour Party has a majority from influencing the UK’s international relations. At an event held last year by Conservative Friends of Israel, a lobby group within his party, Hammond said:

“Under a Conservative government, our foreign policy will be made in the Foreign Office and not in hundreds of Labour-controlled town halls.”[7]

In January 2016, Labour MP Jo Cox called the Conservative government’s legal threats to curtail the boycott of Israel "a gross attack on democratic freedoms. It is our right to boycott unethical companies.”[8]

“When Europe is discussing its attitude to Israel, do you want Britain - Israel’s greatest friend - in there, opposing boycotts, opposing the campaign for divestment and sanctions, or do you want us outside the room, powerless to affect the discussion that takes place?”[9]

In a statement issued in June 2016, Dr Jill Stein, Green Party candidate for the 2016 US presidential election called on Washington to end its support for Israel and Saudi Arabia citing war crimes and massive human rights violations as a reason:

"With regard to Israel, the United States has encouraged the worst tendencies of the Israeli government as it pursues policies of occupation, apartheid, assassination, illegal settlements, demolitions, blockades, building of nuclear bombs, indefinite detention, collective punishment, and defiance of international law. Instead of allying with the courageous proponents of peace and human rights within Palestine and Israel, our government has rewarded consistent abusers of human rights. In addition, the Stein campaign supports actions of nonviolent resistance to the policies of the occupation and of the Israeli apartheid regime, including those of the global boycott, divestment, and sanctions (BDS) campaign, which was endorsed by the Green Party of the United States in 2005 and is supported by thousands of civil society peace activists and organisations."[10]

On 19 June 2016, Jordana Cutler, Chief of Staff at the Israeli Embassy in Washington and former Advisor to Benjamin Netanyahu, was reported to have joined Facebook’s Israel office to oversee the planning and execution of measures taken to combat the BDS campaigns.

Cutler’s new post was applauded by Israeli Minister of Public Security Gilad Erdan, who announced in June 2016 a series of legislative measures taken by his government against promoting the boycott of Israel:

“If we want to convince the world that de-legitimation of Israel is something wrong and that there should be consequences, we must start here in Israel. There will now be a real price to pay for someone working to isolate Israel from the rest of the world. I set up a legal team, together with the ministry of justice, that will promote governmental legislation on the matter. “There has been an advance in dialogue between the state of Israel and Facebook which realises that it has a responsibility to monitor its platform and remove content. I hope it will be regulated for good.”[11]

A document sourced from Boycott Divestment and Sanctions 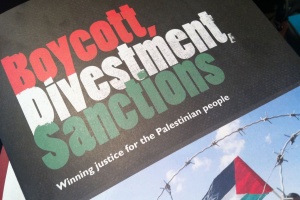