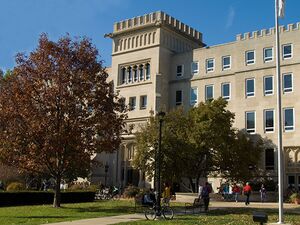 The Bradley Polytechnic Institute was founded by philanthropist Lydia Moss Bradley in 1897 in memory of her husband Tobias and their six children, all of whom died early and suddenly, leaving Bradley a childless widow. The Bradleys had discussed establishing an orphanage in memory of their deceased children. After some study and travel to various institutions, Mrs. Bradley decided instead to found a school where young people could learn how to do practical things to prepare them for living in the modern world. As a first step toward her goal, in 1892 she purchased a controlling interest in Parsons Horological School in LaPorte, Indiana, the first school for watchmakers in America, and moved it to Peoria. She specified in her will that the school should be expanded after her death to include a classical education as well as industrial arts and home economics: "...it being the first object of this Institution to furnish its students with the means of living an independent, industrious and useful life by the aid of a practical knowledge of the useful arts and sciences."

In October 1896 Mrs. Bradley was introduced to Dr. William Rainey Harper, president of the University of Chicago. He soon convinced her to move ahead with her plans and establish the school during her lifetime. Bradley Polytechnic Institute was chartered on November 13, 1896. Mrs. Bradley provided 17.5 acres (71,000 m2) of land, $170,000 for buildings, equipment, and a library, and $30,000 per year for operating expenses.

Contracts for Bradley Hall and Horology Hall (now Westlake) were awarded in April and work moved ahead quickly. Fourteen faculty and 150 students began classes in Bradley Hall on October 4—with 500 workers still hammering away. (The Horological Department added another eight faculty and 70 students.) Bradley Polytechnic Institute was formally dedicated on October 8, 1897. Its first graduate, in June 1898, was Cora Unland.

Originally, the institute was organized as a four-year academy as well as a two-year college. There was only one other high school in the city of Peoria at the time. By 1899 the institute had expanded to accommodate nearly 500 pupils, and study fields included biology, chemistry, food work, sewing, English, German, French, Latin, Greek, history, manual arts, drawing, mathematics, and physics. By 1920 the institute dropped the academy orientation and adopted a four-year collegial program. Enrollment continued to grow over the coming decades and the name Bradley University was adopted in 1946.[2]

The first music building on Bradley's Campus was built in 1930 and named after Jennie Meta Constance (the English department), who was murdered on August 28, 1928. In 1962 the building was renovated to become the music building of Bradley's Campus.[3] Only approximately $2,500 was spent renovating the building, most of the money was spent turning a kitchen into a classroom. In 2002 more renovations were made to Constance Hall to modernize it and make it more spacious. The renovation included an elevator and more office space.