Brian Michael Jenkins is a terrorism expert who produced the RAND/Terrorism Chronology Database in the early 1970s. Edward S. Herman termed him the "Rand Corporation's top resident expert on terrorism".[1]

Brian Michael Jenkins' website claims that he is "the world's leading authority on terrorism & sophisticated crime."

A December 1978 edition of EIR, Michelle Steinberg reported that “Key in the planning level of any terrorist activities linked to the Guyana horror-show is Brian Jenkins of the Rand Corporation. Jenkins is cooperating at high executive levels with British intelligence in planning terrorist operations, and has taken a key role in planning the cult phase of terrorism. This should not be surprising to anyone who is informed of the background of Rand or its various involvements in creating Jones and other cults. Rand was integral, together with such entities as Israeli intelligence and the Office of Naval Intelligence's British-controlled National Training Laboratories, in furthering the British "MK-Ultra" project run under Allen Dulles's CIA cover. Undercover and other most-reliable sources have given us a hard dossier on a very, very "dirty" Brian Jenkins.” [3]

Following the 1993 World Trade Center bombing, the New York Port Authority asks investigative and security consulting firm Kroll Associates to help design new security measures for the WTC. Brian Michael Jenkins was Kroll’s Deputy Chairman, and he leads the analysis of future terrorist threats and how they might be addressed. Assessments conclude that a second terrorist attack against the WTC is probable. Although it is considered unlikely, the possibility of terrorists deliberately flying a plane into the WTC towers is included in the range of possible threats.[4]

Kevin Ryan writes that "For many years prior to 9/11, two Americans were in unique positions to originate and frame the national conversation about terrorism. Those same two people, Brian Michael Jenkins and L. Paul Bremer, played extraordinary roles related to aviation security and World Trade Center (WTC) security in the few years before the 9/11 attacks. Could Bremer and Jenkins have been front men for a program that hyped the threat of terrorism while at the same time manufacturing terrorist events for political purposes?"[5] Mark Gorton writes that Brian Michael Jenkins is "an absolutely key figure for understanding the core of the 9/11 operation", noting that he lead Kroll's work on the WTC after the 1993 bombing and that he advised US Secretary of State George Shultz on matters of "terrorism".[6] 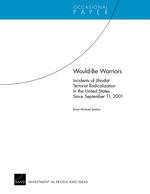 Would-Be Warriors: Incidents of Jihadist Terrorist Radicalization in the United States Since September 11, 2001

Jenkins has continued to promote the "war on terror", writing to support narratives such as the "radicalization" of "Islamic terrorists". Jenkins stated to the National Commission on Terrorist Attacks Upon the United States on March 31, 2003 after the 9/11 attacks that "Intelligence can be critical in assessing terrorist threats... Institutional intelligence capabilities need to be rebuilt."[7]

He is also widely published by a lot of commercially-controlled media, including the Guardian.[8]

In 2003, Jenkins and Frances Edwards-Winslow published Saving City Lifelines: Lessons Learned in the 9-11 Terrorist Attacks, the "only official account of the Mural Van".[9]